Well it looks like if my predictions (well documented in my books and broadcasted on Coast To Coast) are rapidly taking place. For years now I fought ignorance and abuse and I can finally see that my predictions are coming true. The world has grown to my thinking and I am glad that others' voices and opinions are being heard.

The age of Pisces (deception/illusion) has taken its last breath and will force many young souls all over the world to re-evaluate their religious beliefs. Yet so much work is to be done to finally bring peace, respect, and harmony to this world. It will be a difficult task to change the consciousness of billions of people that have been manipulated the last two thousands years by a greedy power oriented church. As imposed by the celestial nature of things, the new Age of Aquarius has surely taken over and it is with people like George Noory and I, that the message will be heard and mankind will finally be able to rise to a higher vibration where critical thinking and true wisdom will replace fears and ignorance.

Back in 1991 on Coast to Coast with Art Bell, I tried to foreworn of the upcoming religious war that would take place over the entire world and the re-structure of religion as we know it, but my message went forth with no avail. The many thousands of people listening to his show, not even the man himself, (Art Bell) ,who was directly touched personally by my premonitions, ever understood or even acknowledged my visions.

I was very cautious that night in April 1991 and thought of the best way to divulge such an important prediction to a very religious man and the majority of his listening audience. I chose to be direct and it worked. I have over the years try to get a copy of this show but Art Bell removed it from his archives. I did thousands of readings over the years and per your request this show was sent to many of you out there. If you happen to have a copy of that show (April 1991) please send it my way.

Take the time to read what Enrico Righi, and Luigi Cascioli from Italy have to say about the Vatican's manipulative ways and religion.

Back in 1974, I was in England and spent some time on the pier in the arcades watching kids playing the first video games ever created.
I was amazed by the technology and wondering; when applied productively for space and science where these new tools would take the human race.
I was standing behind a kid for a while but a bit too close for comfort and without taking his eyes away from the game, he shouted, " Off man, you're in my way".

I moved back and kept watching him handling the stick and winning game after game. When the game was finally over, I congratulated him for his talent, and while staring at me he smiled and ran out of the arcade.

His gaze amazed me and the "energy" he accumulated in his eyes was like electricity. His stare was powerful, penetrating, glowing, and somewhat magnetic. For a second I wished I had this shine in my own eyes thinking how many pretty girls (I was only 22 then) would fall for me.

I went by the beach and pondered a while about the incredible gaze and the impact the kid's eyes left on me. Then after a while I realized what took place and what brought the glow to this kid's eyes. This kid was there every single day and did not know that he was performing heavy duty "exercise" to his eyes. The coordination of hands and eyes brought a tremendous amount of blood to the eyes and gave it an abnormal supply of blood and oxygen.

Not knowing better I went back to my little room and began to move my eyes in all directions, a decision I lived to regret dearly for the next few days. I am very stubborn and I wanted to see if I could get the magic glow I saw on the kid's face. I kept doing all sorts of movement, left, right, and up/down; making an imaginary cross, circle, looking up left and right, down left and right for hours. At this point I did not know that my untrained eyes would have serious problem eliminating the tremendous amount of blood and oxygen.

I went to bed that night totally whacked

The next morning I was petrified looking at myself in the mirror, I looked like if I had a boxing match with AliMy eyes were as black as can be and it took me a few days to become normal again. I was scared to death, but I wanted to know more so I decided to go to the local library and educate myself on the complexity of the eyes formation and its common diseases. I spent hours on end reading all that I could and finally the idea came to me to build a device that would heal or prevent eyes disorders.

My reason was very simple, those exercises created a physical reaction and obviously prove that if any exercises work for any muscles in the body it has to work for the eyes too.

In the vast majority of the situation, the cause is infective in nature with physical damage being done by the infecting organism. Much work has been done to correct the problem with surgery but nothing has ever been done to prevent degradation. Incidentally we all heard of the "lazy eyes" or Amblyopia, usually optometric doctors gives patients some exercises to perform.

So I went to work and designed a device that incorporate sophisticated technology and simple natural laws of exercises. I also realized that REM are the natural way to get eyes exercises as we are sleeping, but again "the mental snobs" will challenge any idea that seem taboo to them. In the waking state the entire body get its regular workout and nature has its own way when it comes to the eyes.

I found out that we have three pairs of muscles in each eye and that we are barely using a third of these muscles nerves pull while the neck does the rest. My device blocks your chin forcing each muscle to move to their maximum length. This piece of equipment also involves a unique computerized diagram of exercises that I designed, forcing all muscles to pull in all many directions we naturally do not, forcing action, elimination and vitality in the complexity of the eyes structure.

This methodology requires the patient to ingest natural herbs and vitamin specifically designed to bring more life as to slow down, stop or reverse the flattening of the eyeball.

To prevent serious eye disease or correct eyes problem the three pairs of muscles in each eye must be exercised and ONMT can only bring more food, more blood, more oxygen and more strength and will help in the elimination of dead cells microorganism and foreign body which is the seat of all eye infections.

The unique device can be used in many fields from private residences to hospitals and the software can easily be written for any software. The specifically designed screen will help people using computers all year round to regularly exercise their eyes in the privacy of their home. ONMT usefulness is both preventive and curative and can help in the restoration of health following a surgery.

In this high technology age, the field of medicine is constantly changing and simple natural laws of exercise must be taken very seriously. ONMT is a unique but simple tool where its feasibility, use and financial prospect are phenomenal because of limit of innovative eye tools and most of all the need for a large part of society suffering eye problem.

When I finalized my project I sent a letter to Aston Science Park in London and they were amazed by the idea but when they asked me about my medical background they quickly dismissed my invention and me. I tried my luck in other scientific institutions and experienced the same response.

I thought a protocol would help and I and submitted ONMT idea to many optometrists doctors and all of them asked me for the prototype and test it on their existing clientele. But so far no one has sponsored my idea and I have to wait for the world of medicine to grow up too.

There are exercising machines being made and selling every single day, each one specifically designed to work out a part of the human body, why not making a machine to exercise the eyes? I have the plans, I have the idea for the software and I designed a specific screen for your computer that will easily fit yours. The chips for the exercise program are easily available and the plans ready to go.

My question now is, is someone out there interested in my invention and my vision? Starbuck and McDonald started with an idea, I am much too much busy to give time and develop this new product and if one of you is willing to investigate the possibility and invest in ONMT simply let me know and call me for more information. (602) 265-7667. Note also that this idea is protected and patented so I can safely divulge the concept to the entire world.

If you are in England

The taping for the Discovery channel on Nostradamus' life and predictions has been changed. I will be gone from January 27 to Feb 1st and all info about this television show will be on one of my newsletters, so keep reading them.

If you are in Tucson, join us

If you are in San Diego, join us

Live to tape with Rob Baldwin
Jan. 25, 2005 @ 6:00pm PST
For more information, go to Journey into the Void at journeyintothevoid.com/

If you are down under in Australia, join us
Have a great time and learn all about the Divine and UFO
Join me in Adelaide  Go to drturi.com/Australia-Adelaide.php to learn more. 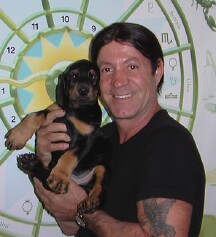 Remember my prediction to George Noory made in June 2005? You will be involved in a television project in 2006
Guess what it happened, so make sure to get the show and remind him about this prediction too if you can get through.

Predictions for 2006 With George Noory
World Wide Predictions For 2006 go to predictions.tv/

I bought a puppy (Doberman Pinscher) and I named it after the constellation of Draco. See picture at right.

Lastly, the Healing Crystal and my new Healing Room picks will be available soon.

Note also that I am working hard every single day to fulfill my commitment to give you the best of my ability, so if you ordered a Full Life Reading BE PATIENT it will be worth the wait.

Be safe, blessings to all