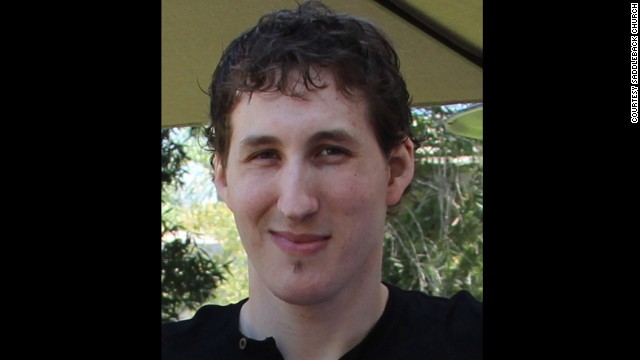 Matthew Warren, 27, died from an apparent self-inflicted gunshot wound on Friday, Stand by for “The stars and Fate of  Matthew Warren.”

Matthew Warren, was the victim of induced religious poisoning from a very early age and this fact is much too obvious to ignore.  If the good, concerned God fearing parents of Matthew failed to save their own son from committing suicide why would anyone follow the teachings of his famous father?

Where is common sense? its like joining a group or a cult were the creator himself committed suicide… these are very obvious signs for you to stay clear from the deadly energy and the deceptive teachings…And if you are not spiritually “refine” enough to detect the omens, then you are not ready for a better, more productive vibration that’s all…but there is always a price to pay for any form of ignorance!

I wonder, how is it possible for anyone to be  unable to face the reality of those religious teachings being the result of such a tragic event?  With a biblical name such a Matthew the possibility for any child to regenerate the spirit adequately with the cosmic fluid is an impossibility especially if a regime of prescribed antidepressants are making the situation worse.

Matthew was born under the very emotional sign of Cancer and I doubt very much his cosmic unconscious parents knew about the extreme power emanating from our closest satellite the Moon. These people regurgitate the bible on a daily base and have no spirit nor critical thinking of their own.  Yes the words lunatic, moody, crabby reflects her steady impact upon Matthew’s deteriorating psyche for too long and he acted out his cursed mind.  Without a lunar cosmic consciousness  (get my 2013 Moon Power ebook) Matthew could not apply his will to fight the gloomy depressive lunar fluid and he lost it.

I also doubt very much his religious parents ever considered reading my 525 page book “The Power of the Dragon” as to understand what their son Matthew,  born under the “Death Wish Generation” and with Pluto (death/passion)  and Saturn (depressions/fears) all karmically located on his nefarious Scorpio Dragon’s Tail.

To make the situation much worse, this extraordinary stellium displayed its cosmic energies in the very powerful deadly sign of Scorpio right in Matthew’s 5th house of speculation, love and romance.

This enunciate a very private personality in need of an endless deep and committed love he could never get from his busy parents more concerned with fame and money and the world at large than their own kid.  And Matthew took his revenge the only way a True Scorpius soul know how, this is by killing others  (Adam Lanza) or committing suicide! But again I do not expect the educated experts or God’ servants to remotely understand the depth of my rare wisdom they perceive as the work of the devil or only pseudo-science.

In fact ” I am Adam Lanza’s Doctor – Rima E. Laibow, MD” would learn much from my 45 years of  independent work on the working of the human psyche.

Matthew was born with Mars (danger/weapons) in Cancer on his 1st house (the self) and depict the strong probability for a violent death.

His Moon (emotional response to life) was in Leo (love/fame/children) conjuncting his Mercury (the mind) and this leonine qualities do not agree with anything involving a promise to end up in hell, guilt, modesty and was repressed drastically dealing and living in a religiously poisoned early environment.

Shocking/surprising Uranus resides in his 6th house of health meaning a tremendous amount of freedom, travelling and originality offer full psychical regeneration to the unfortunate victim. Anything else the worse of the shocking power of this planet will curse the body, mind and soul.

Sad enough the moon was waning was he re-incarnated (and when he departed) from this dense physical world tripling the negative depressive impact of the waning moon upon his psyche.  At the end, this is the result of total cosmic/moon ignorance, the fear of the ridicule combined  with religious poisoning.

Your educational, religious and political system are NON cosmic conscious and Matthew, somewhere somehow suffered the same fate that Adam Lanza with the only difference that he decided to kill himself only. You are now readers,  hopefully  understanding and forced to accept the reality of all our messed institutions and why it is important to help Dr. Turi to build his Astropsychology schools so all the “monsters” created by science and religions  have an option to apply their will instead of becoming murdered or kill themselves.

The situation is grave knowing the current Scorpius Draconus is aiming for the children, SCORPIUS DRAGON HAS ARRIVED! one more reason for you to pass on this newsletter to all concerned parents having difficulty understanding  their children. I will offer you more wisdom, counselling  and guidance for your child than any and all traditionally educated non cosmic conscious psychologists combined!  Read the great endorsements from the people who trusted my work and I with their lives and the one of their children…

Adding, removing guns or medicating the children is NOT the way to go,  only the moronic religious God fearing mass or the “educated” scientific community think they have the right answers for you  when they don’t! This is a serious universal psychical problem, depicting the fast deterioration of our children mind body and spirit and none of them were trained/educated to deal with this phenomenon.

Reconnecting with God’s celestial divinity and using the signs will provide the answers science has been enslaved to uncover but never will…Unless they reconnect with the spirit and God’s marvellous universe.

God created the stars and the heavens to be used as sign so that you and your children may lead a safer more productive life!