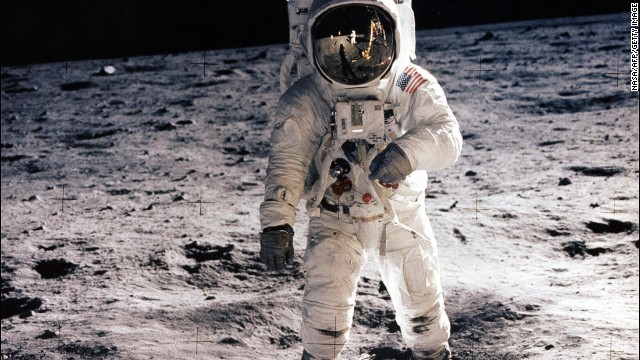 Following the global excitement of Armstrong’s step off the Eagle spacecraft’s ladder in July 1969 only 11 more astronauts have walked on the lunar surface and people have not been back since 1972.

The moon bases have not materialized and supersonic flights for commercial passengers, that looked like they would become commonplace after test flights during the Apollo era, came and then stopped.

So is it all over for moon exploration? NASA says not though its focus is on sending astronauts to Mars in the 2030s.

“As international partners and the growing U.S. commercial space industry venture beyond low-Earth orbit as well, there may be some opportunities to return humans and robots to the lunar surface. Our roadmap for exploration includes the possibility of assisting partners with that kind of exploration, but our investments in human spaceflight are focused on enabling the path to Mars,” a NASA spokesman told CNN.

“We’ll soon return humans to the vicinity of the moon … [a] proving ground we need to test these key capabilities and help us advance on the human path to Mars,” he said.

In order to keep the wealth “machine” well oiled, the privileged select “educated” crowd of scientists must keep their investors at bay by entertaining the gullible non cosmic conscious mass with yet another well produced video!

Anything wrong with this picture?

Look around you reader, this is your world run and owned by evil! Adults and children alike are exterminating themselves by murdering each others and endless suicides of all ages are cursing society to the point of total desensitization “West Englewood leads in homicides for July.”

While a section of the ” educated” scientific community serving the pharmaceutical greedy corporations are playing with rats’ brains cells, other branches serving NASA today would rather build robots than to work hard like we all do!

Those souls are the kids and the legacy of the 1960’s crowd working then on the Eagle spacecraft mission for NASA  aiming for the moon.   The mentality of those new scientists is clear, “we are much too smart and too educated to work like you, so we are above and we must follow the footsteps of our parents!”

Much like the child of a celebrity born with dozens of gold spoons in his mouth, the smooth road  is offered on a golden plate and this entitle them to “naturally” benefit from their parents initial work (or luck) and abuse us with their lies to get to the green!

They all realize how costly and dangerous those missions were and with the new advanced technology available to them why sending and risking more lives out-space?  But do not think for second they do not know about the physical limitation of the human body, its all about money and the endless promotions of those deceptive voyages on CNN…

My wife and I just came back from Thailand and it took us nearly 2 weeks to get back normal, I am sure many of you flew to Europe, Asia and Australia and can easily relate to us. Now, no matter how long or how hard you train a cosmonaut, it is an impossibility to physically land a man on Mars.

“Yes they said the same on the moon and we proved all the skeptics wrong then,” but the moon is only 238,900 miles from earth while Mars is about 35 million miles from the earth — and was closer on Aug 27. 2003 than at any time in the last several thousand years. Over two years, the distance varies from about 39 million to about 240 million miles.

Those astronomical numbers speaks the truth of a vast distance only a machine can cover safely. And with this fact in mind do you think this particular branch of the scientific matrix will tell you the truth about their real limitation and the impossibility to send  a man on Mars? Doing so mean spitting on your money and lead a hard working life without little robots to play with everyday!

Indeed they need your money to survive and keep their great lifestyle and their children astronomical studies alive. Its like an insurance to them promising more delusion, more discussions, more work, more money and more deception in the long run to the children of their children…

One-Way Trip to Mars and the 78000 Signed Up Morons

Could robots build a base on Mars and who benefit until then?

No that I do not recognize the incredible values offered and accomplished by science readers, I am not an idiot! But rest assured no man will ever set foot on Mars or any other planets for that matter. Indeed smart people are quite rare but they are out there!

From Laurie Shafer Your mentioning that the Moon was closer on Aug 27. 2003 than at any time in the last several thousand years does lend to my perspectives.

However, I do believe we will in the future visit far away solar systems, but it will be with the help of ET’s integration and only with the spirit because our physical conception does not allow to “escape” the dense physicality of earth… NASA: ‘Close’ to finding alien life

And why do you think I am so sure of my claims? First because not a single scientists today is aware of the “soul of the cosmos” and its real cosmic and psychical purposes as intended to bless and curse the earth by God! Indeed science has lost the spirit…

We are now coming to the core of this article and, as you read and assimilate my words, you will undeniably realize God’s divinity and how much science is willingly and unwillingly deceiving you and themselves…

First;  it is important to realize that… Sorry the rest of this educational article is too sensitive and for my VIP’s only!  SHOW YOUR SUPPORT – JOIN THOUSANDS OF SMART PEOPLE AWAITING THE FUTURE