The devastating earthquake that virtually flattened Mexico City, killing more than 300, has sparked fears California could be next.Experts fear a “big one” tremor greater than magnitude 7 could cause extensive damage and loss of life in the state’s southern cities.
Los Angeles is said to be particularly at risk due to its proximity to an 800-mile fissure called the San Andreas fault.Seismologists believe pressure has been building up along the fault for decades, meaning a massive earthquake is long overdue.
In just the past 24 hours, the US state has been rocked by 18 earthquakes, the most powerful of which measured 3.0 magnitude. 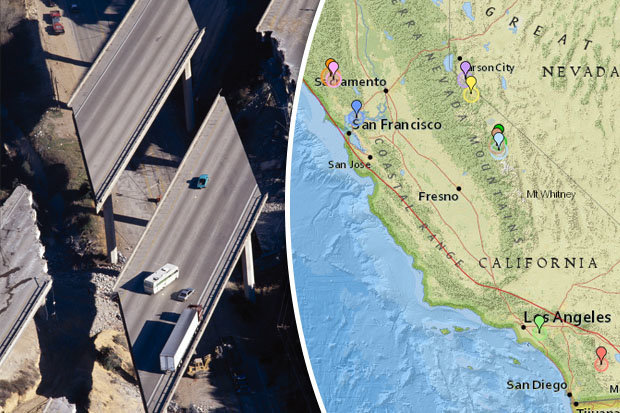 GETTY/EARTHQUAKE TRACKBIG ONE FEARS: Experts believe a huge earthquake could cause up to £233billion of damage 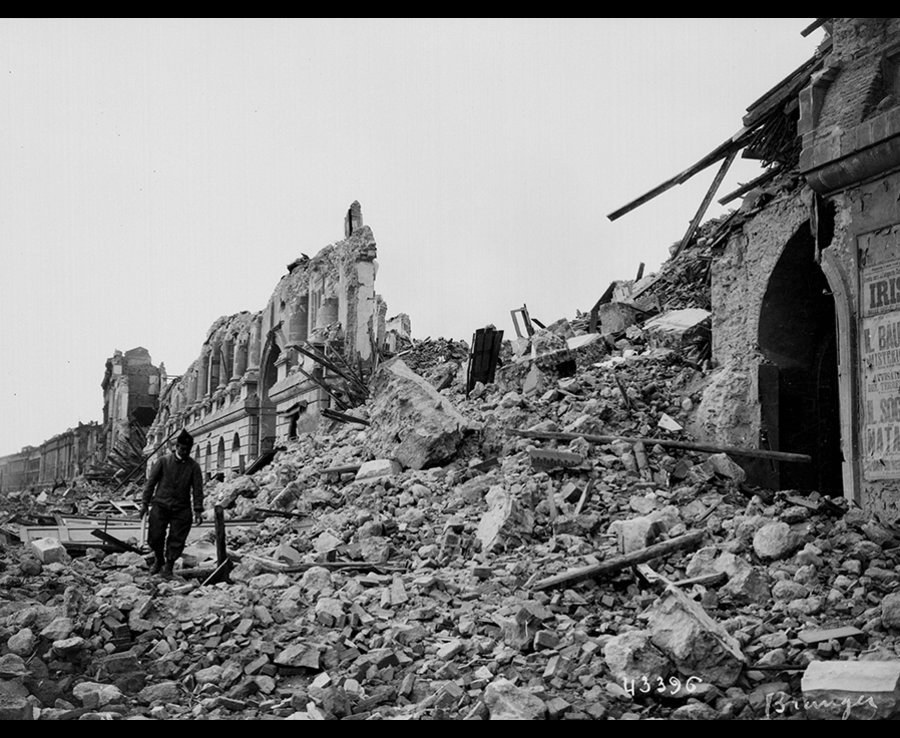 ROGER VIOLLET/GETTY IMAGES
Messina, Italy, 1908, 7.1 on the Richter scale. Between 75,000 and 200,000 lives were lost
John Rundle, professor of geology at University of California Davis, said LA’s “earthquake potential score” has reached its highest level for 23 years.The earthquake gauge has surpassed the 77.8% level assigned to the 6.7 magnitude Northridge Earthquake in 1994.
The Northridge Earthquake killed 60 people, injured more than 8,000 and caused around £29billion ($44billion) of damage.
He said: “The data says that within 100km of Los Angeles, as judged by the number of small earthquakes, we are in the same state of hazard as we were just prior to Northridge.” 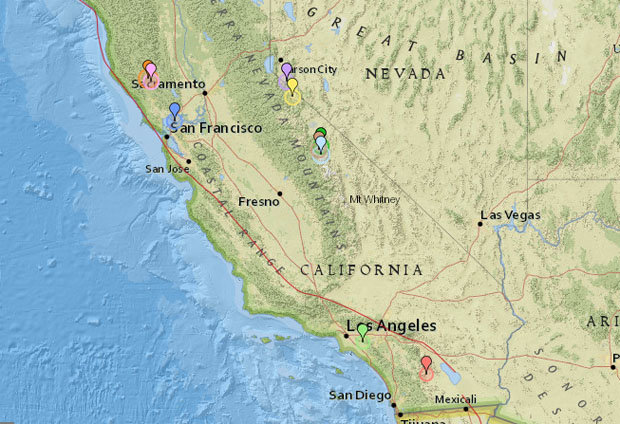 EARTHQUAKEMAPPED: California has been struck by 18 minor earthquakes in the past 24 hours
Robert de Groot, scientist at US Geological Survey, said the San Andreas fault could unleash the next “big one.”
He said: “The Northridge earthquake was considered to be moderate. “For California, our big earthquakes are typically in the high magnitude 7s.” 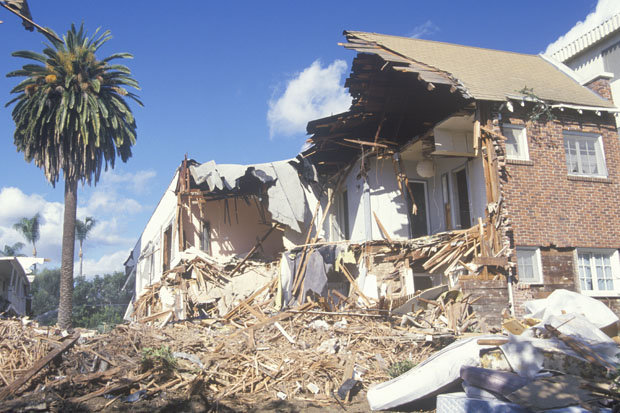 GETTYDESTRUCTION: A Santa Monica apartment building destroyed by the Northridge earthquake in 1994
A “big one” greater than magnitude 7 would be felt “pretty widely throughout the state”, but “the worst shaking will be in the Los Angeles basin”, he said.
“We are expecting a very large earthquake on the San Andreas Fault,” de Groot said.“We don’t know when this earthquake will take place, but it’s a very good candidate as a place where a big earthquake will happen eventually.” 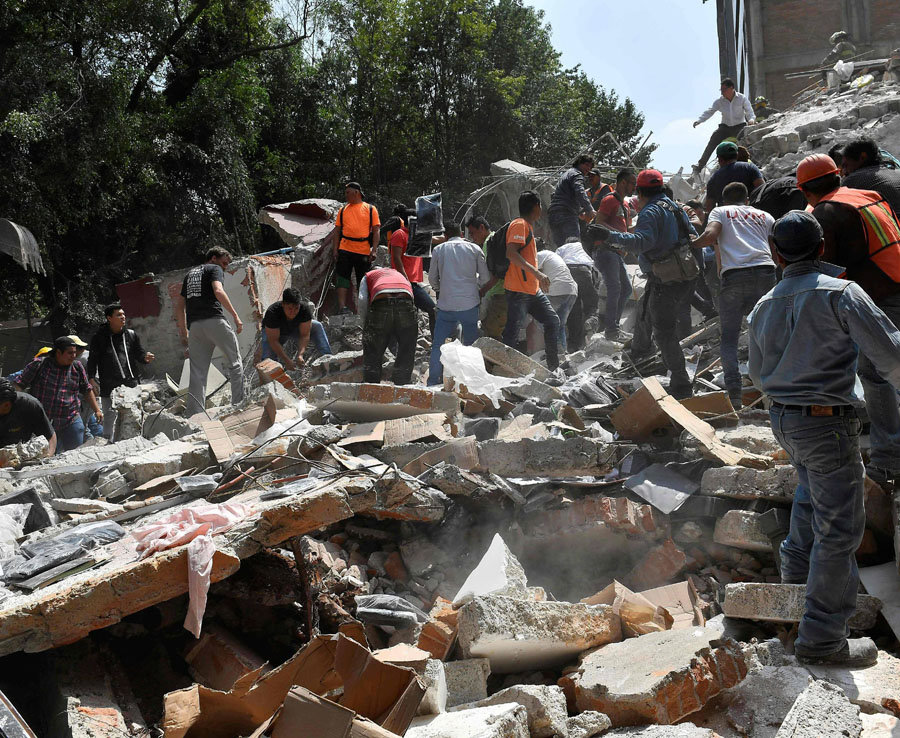 AFP/GETTY IMAGES
People remove debris of a building.
Catastrophe-modeling firm AIR Worldwide conducted a study analyzing the impact of a large earthquake in California.The simulation found that damage to buildings could be “upwards of  ($300billion) in total.”
Lisa Grant Ludwig, a professor of public health at UC Irvine, is urging people in California to prepare for the inevitable.
She said: “We’re never going to be able to stop earthquakes, they’re going to happen no matter what.“We have to act before, not after.”

While the majority of humans are not curious nor spiritually advanced enough to make a good use of my cosmic pearls of wisdom; its time for some smarter and curious people to get the dated warnings NOW  and ACT BEFORE !

This is what can make the difference between life and death!

We are offering to our smart readers, the rest of the year 2017  SOS to the world deadly windows for  $100 – That is  all the dates until the end of the year for you to plan around those dates and avoid traveling to those areas for the next three months!

Checking  all SOS to the world deadly windows for the next three months demands a lot of research and work because those Universal dates must also comply with your own personal dragon window dates!  Thus if you order, be patient  please, you may have to wait a week or so, thus order now!

If you are not interested in this offer, its probably because you do not do anything about the accuracy of my predictions and think your life is not worth a miserable $100 bucks! Email teraniapromodir@gmail.com

Also, there is no fees to join thousands of subscribers to the Cosmic Code website, ITS FREE! and get my newsletters, warnings, and most of all my SOS to the world deadly windows right into your mailbox!

Then later on, once you are convinced you are dealing with a real modern prophet, nothing stops you to become a VIP and let Terania and I offer you solid personal and universal (daily/monthly) guidance and predictions.

Do not let the reptilius infect and control your body mind and soul! The part of God in you (your will) is much stronger then those entities using all the destructive cosmic winds to create natural disasters and enslave countless  people from all walks of life into fear and to behave emotionally, irrationally  and destructively.

The reptilius are winning the battle against humanity and no one supports or pays attention to a modern prophet! Galactic Federation Grand Cosmic Order

BECOME A VIP, BE SMART, BE INFORMED, BE GUIDED ACCURATELY!

The Magical Power of Talisman

Dr. Turi is a proficient author and a captivating speaker, his profound Universal Wisdom astonishes everyone. He was recognized in the 2003 Marquis “Who’s Who in America.” Dr. Turi is the personal counselor of many celebrities, Ivana Trump, Peter Fonda, Gary Busey, Denis Haysbert, John Gray and many others. Dr. Turi is a favorite guest of George Noory on Coast-To-Coast AM radio and the BBC in London and appeared in numerous television programs worldwide.He speaks of the cosmic face and celestial tools of the creator and warn the world with undeniable well documented undeniable predictions.http://www.youtube.com/watch?v=4BX3TzPUt08

View all posts by Dr. Turi →