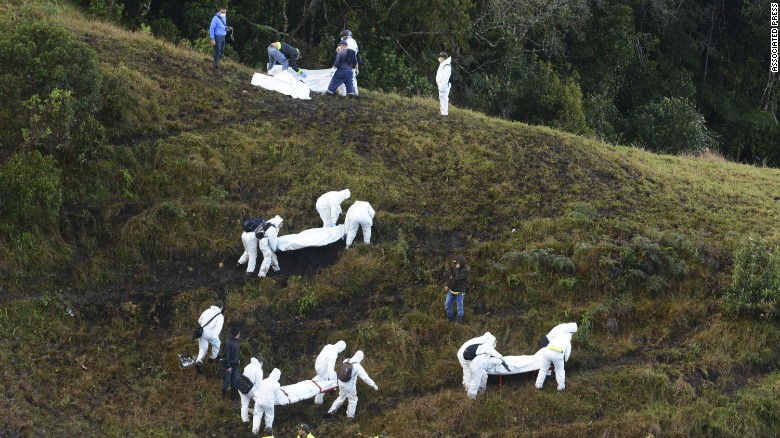 May God Bless the lost souls of the victims of the religious and scientific matrix endoctrinating greedy machines.

Rescue and forensic teams recover the bodies of victims of the LAMIA airlines charter that crashed in the mountains of Cerro Gordo, municipality of La Union, Colombia, on November 29, 2016 carrying members of the Brazilian football team Chapecoense Real. A charter plane carrying the Brazilian football team crashed in the mountains in Colombia late Monday, killing as many as 75 people, officials said.

The majority of those people were very pious or hard skeptics and either feared or ridiculed my cosmic work, yet all are now gone in the name of  ignorance. Plan against the cosmic code rules and pay the ultimate price, indeed the God they trust or reject takes no side…

INSANITY RULE AND THE REPTILIUS ARE USING THE COSMIC CODE AGAISNT UNCONSCIOUS HUMANS!

Crashed jet: ‘Total electrical failure and without fuel? Are you jocking? What are the chances of this “accident” happening to you if you are at the wrong time at the wrong place?  I say 99 percent.

Do not become a victim of the religious or scientific matrixes who are oblivious of God Cosmic Divinity! Bypass your confortable zone and be curious or become part of the next statistics of those “accidents.”

December 2016 — Mercury Retrograde:  A trend loaded with serious problems with general communication and transportation, all related to work, health and service to the world.  The stars will force you to stop every moving parts and will not allow you moving forward, no one is safe on the road, in the water and in the air!

You better know when those deadly cosmic winds will stop because they are already operational. Join us to find out when to plan your trips or what to do to avoid becoming a victim.

Mercury retrograde is a phase that happens about 3-4 times a year. Each destructive “window” is operational for three to four weeks, thus caution is strongly advised during this period.   Chain reaction accidents, Heavy loss of lives due to nature’s devastating forces, aeronautical disasters and structural damage is to be expected. Once more, realize that we do not use traditional dates found in popular ephemera. Years of practical observations lead my husband to extend the Mercury retrograde motion and period of time. Many cosmic unconscious, unprepared souls will pay the ultimate price by losing their precious lives and this could be you too.

The full 2017 year of Plutonic, Uranic and Moonic window dates and ALL 2017 Mercury retrograde motions are available to all Cosmic Coders Only in our Personal and Universal Forecasts,