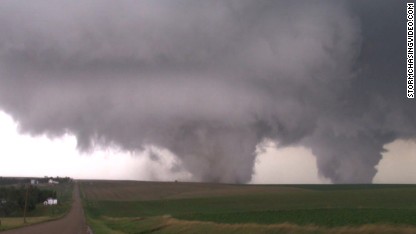 A round of dangerous severe weather pummeled Nebraska, killing one person and critically injuring at least a dozen more after hitting four towns hard.  Gigantic twisters side by side

When I wrote “Rush Limbaugh, Glenn Beck, Mike Broomhead, Sean Hannity, Joe Arpaio – Daddy’s Little Girl and Sexual Education” on June 14, 2014, the NWS knew nothing of the possibility of experiencing double tornadoes, nor USGS anticipate two earthquakes of a magnitude above 6.0. As Predicted  for the dates of June 14, 15, 16, 17 all happened on the exact given dates (see below!)

In all honesty readers, does the OBVIOUS keywords following my OBVIOUS quatrain speaks of a RARE and unusual/shocking cosmic energy I foresaw well before NASA, USGS and all the weather men working in the media?  Is this fact too real for some to accept as is? 6/16/14 – Los Angeles mayor drops F-bomb on TV – Shocking/Surprise?

But instead of wonder and appreciate the gift,  much of the reaction I get from my endless dated hits create animosity, enviousness and total deny because my rare cosmic ingeniousness is unsurpassed and unmatched by any geologists. This make me special and insecure people do not like that!

Those rational students spent years studying the weather in  their accredited  colleges and universities, but, be sure readers, none of them will ever offer you the accuracy of God’s cosmic weather warnings…

I kept a record for the skeptics, the agnostics, the atheists and all scientists alike to ponder upon and instead of laughing and ridicule Astrogeology, may I suggest them all to change their pitiful attitude and accept the facts I present today?

Indeed earthquakes happen everyday but those above 6.0 (as mentioned in my keywords) DO NOT!

Note also there is no denying the RARITY of a double tornadoes also “predicted” with my modified software. It is simply impossible for any intelligent human being to deny the fact I fully predicted those rare events…

And all this without you wasting taxes on the scientific  matrix studying the cause for rats depression!

Now that I did my usual best to rationally  reach the scientific community with SOLID facts, let me explain a few things to those interested or part of the immense UFO community…

First, once more acknowledge the unusual cosmic energy (and the results) posted a few days ago on many social media. All I can hope is for my confidence not to be perceive as an ego trip by those suffering both insecurity and inferiority complexes. Here it is again with the collected news…

In UFO Conspiracy Against Dr. Turi I wrote the discomforting truth about UFO events promoters and UFO TV shows producers who never saw nor dealt directly with the incredible themselves!

Like the scientific or religious community those people keep regurgitating old stories such as the Roswell UFO incident that took place in the U.S. in July 1947, all assuring a sure cover up and the reality of ET’s.

Do you know readers, in the celebration of the fiftieths anniversary of the Roswell incident, I was asked to make some predictions which are now buried in a time capsule 6 FT under the Roswell city lobby?  Indeed the old UFO folks were much more perceptive than the idiots running UFO conferences today!

Those “experts” travel the world looking for people who have had extraordinary experiences including the International UFO Congress based in my hometown, Phoenix AZ. For lots of  reasons those people deny my very existence and, in my case, probably the utmost proof of the reality of all UFO abductions.

A couple of years ago, they invited me to speak at a very small gathering in Phoenix, but they could not comprehend the “Cosmic  Legacy” and the predictions for the future of humanity I tried so hard to convey to them all.  All they saw is Astrology and nothing about UFO,  not realizing the depth of my mission imposed by those UFO experiences.

I know they all read my work and after “advertising” their lack of perception for years on the Internet, may be today, by reading and acknowledging my latest predictions they may be able to realize how ET’s work through me!

“International UFO Congress” Creator Bob Brown  was a much more spiritual man and he was also  aware of my cosmic mission and trusted me fully with his entire family.  I am not trying to go-back on the UFO rat race nor would I!

At 64 I know better, and if I can’t convince a few idiots of the reality of my UFO legacy, I am not ready, with it being so close to my retirement, to try to convince the rest of the world…  Meantime in “UFO Conspiracy Against Dr. Turi” I gave a set of new dates and my warnings…

I also challenges all those involved in the UFO community to ponder not only on my obvious “UFO cosmic legacy” but to be prepared  for August 9/10/11.

I do not expect nor anticipate any reactions, nor changes with those souls, until it become much too obvious for them to be in denial  any-longer… Until then all I have is the truth, induced by a series of incredible experiences I alone can feel. And with it, the curse for being a legitimate envied  “Chosen One.”

From now on I have my Cyber Cosmic University and with it the option to educate millions of people on the reality of a Cosmic God speaking his cosmic will through a multitude of children born  and from far away solar systems.

Indeed the Cosmos has a Soul, little human beings know nothing about nor yet perceive… And me with it!

ANY DAYS NOW, I will STOP posting for the public and only those who ask will receive the true essence of a real cosmic God!