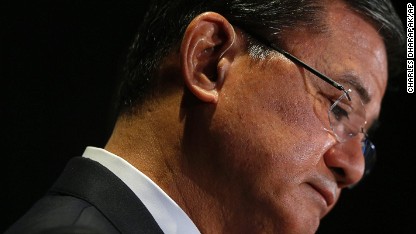 Obama  praised Shinseki’s service as a soldier “who left part of himself on the battlefield,” and a VA leader who helped increase the budget and services, whittle down a backlog of benefits claims and help homeless veterans.

Again, I must mention that the only way for me to help you raise your “cosmic” awareness is to bring to your attention the past, present and future predictions. This is not gloating nor a display of egocentricity but the ONLY way for me to prove my gift in predictive astrology.

From 2014 Arian Draconis Predictions; Prediction # 2 – Expect a full restructure of the Army and the NAVY due to some foreign powers in need/offering manpower to bring stability in some unstable parts of the world. Many high ranking Army/Navy officers will make international news.

The fact is  Eric Ken Shinseki is a retired United States Army four-star general who serves as the seventh United States Secretary of Veterans Affairs. His final U.S. Army post was as the 34th Chief of Staff of the Army. While McCain said, “its time for Shinseki to move on” he and so many unconscious Army/Navy heads are also a BIG target for this Arian Draconis…

And I will be there to remind you when I add their names in the long list of my 2014 Arian Draconis Predictions. No ONE, from top to bottom working in the US Army/Navy is SAFE and many will be forced into a FULL life restructure.

If you make a simple mistake or ignore the  “signs” you’ll pay the price for ignoring God cosmic divinity! .i.e.  Marine tied to Mexico jail bed while others will bring shame serving the enemies of the US.  U.S.: Jihadi was raised in Florida.

I know for a fact, the God fearing souls , the atheists, the skeptics, agnostics and educated alike will not only ridicule or fear my work but will never attempt to investigate it. Thus I have to offer the undeniable facts and try to make this dry crowd think progressively for a change… I trust not all of them were born stubborn “donkeys” following the scientific or religious carrots and with my help, upgrade their perception of a cosmic God.

Keep in mind that my predictions were publicized back in June 2013 readers. This mean well before all the major news directly affecting the Army/Navy, the series of awful fires and all cosmic unconscious celebrities racial comments became public. Yes some people call me CNN before CNN and I am glad to offer you the option to judge for yourself and apply your own critical thinking.

All you have to do is to read the set of predictions involving the return of the “Spirit of Hitler” at the bottom of my 2014 Arian Draconis Predictions article.

There are too many false prophets operating all over the Internet and I am the only one offering you solid, well documented, dated, printed, published predictions.  This very fact make the envious, insecure young souls miss my supreme confidence and assume I am an egocentric. Indeed showing real supernatural powers breed animosity in the atheists born who have nothing but false criticism to offer humanity. Indeed my mission is to upgrade humanity psychical / spiritual welfare and reinstate the values of Astrology, the mother of all science!

The 2014 Arian Draconis  and Hitler’s racial  deadly spirit has been and will be cursing the world for many more months to come. Its war like invading nature has shown through Vladimir Putin ambitions annexing Ukraine and Kim Jong -Un‘s egotistic Army power.

It is so dangerous for such world leaders, including President Obama advisers no to consult the stars or worse ignore those signs… Humanity will be tested like never before in the years to come particularly America!

I warned the NSA and our President of his impending fate when the Cosmic Code will test his presidency next August 2014. All you have to do is wait for yet another of my vision to unfold then judge my accuracy.  I will soon stop offering my work to the public made largely of God fearing young souls and those who can not differentiate my true cosmic pearl of wisdom from SPAM!

God is an eternal, universal cosmic energy referred appropriately as “Dark Matter” by science and faith by Christians!

Reduced Bet start at $50 –  This black and white fossilized sea shells 22 X 6 inches (and the 2 cubes) are very decorative and grounding if you have a strong water sign in your chart.  If you can’t sleep to well or need more creative imagination and intuition this type of fossilized shells  can only add to your life. Best placed in the office, the bedroom or the sitting room if used for decoration only. This is a steal if you get it even for $100.

Remember only VIP’s can bet on the many items we still have to sell before living the country.  Get a piece of history and Dr. Turi cosmic energy in your home. Note, from now on, I will SIGN every articles I sell because I know fame/immortality will follow me after my work is done on earth!

Reduced Bet start at $50 – This porcelain statue is 29 X 9 inches, is not very heavy and VERY fragile. This one has to be packed very cautiously and should arrive safe to your door. Add $20 and get the Angel antique mirror and the absolutely gorgeous Roman Glace Panel on the right. I will sign all items…