May God Bless Your Lost Soul

The sportswriter who blogged his suicide

“Call it death in the time of Facebook. Never before in the history of human communication have suicide notes been such a public affair, easily accessible to the masses and potentially lasting forever.”

“Lawrence Calhoun, a professor of psychology at the University of North Carolina-Charlotte, said the reasons people want to share their deaths on the Web appear to be, in some ways, common sense.”  What a ridiculous comment!  It amazes me how a traditionally educated cosmic unconscious psychologist can come up with such an ignorant rational answer pertaining to death itself.

Remember reader, those who are supposed to be the “experts” in their fields are often the least knowledgeable on the subject. In this case it shows a total unawareness of the deadly “Scorpius Draconis” lurking in the heavens stimulating all the dramatic deadly news plaguing CNN. OMG! Have Mercy on your cosmic unconscious children…

Gunman kills 2, self in Florida –  The Scorpius Draconis at work and more cosmic unconscious human paying the price!

But let me give you more accurate details to what happened to Martin Manley hoping for Lawrence Calhoun and all the psychology professors out there to by pass their five educated/limited human senses and learn something  new today they could never gather anywhere else on the Internet.

Martin Manley was born 3 years after me, August 15 1953 with a the same Dragon axis Leo Aquarius as President Obama and Princess Diana, depicting a “shocking/surprising/explosive” death. Aquarius rules also technology and before his suicide this month, he spent over a year building a vast website.

Sad enough he was not taught by the controlling educational matrix how to control the negative pull of his own personal UCI matrix and his Leo Dragon’s Tail took over. Note also Aquarius rules group and group games and this sign is known to be a genius and quite original “Sister: He was “a square peg in a round hole.”

I own myself a very strong positive Aquarius stellium and I use the Internet not to waste my time with sports but to educate millions of my readers world wide about death  stirred by the 2012/2014 Scorpius Draconis. But my work is not for the envious young souls and will benefit thousands of people born with a curious smart UCI such has…

Dr Turi is now connected to///// PsyD and Experienced Psychologist

I can only hope my readers will distribute this newsletter and hopefully it will land on someone close to the victim then his family because Lawrence Calhoun, a professor of psychology at the University of North Carolina-Charlotte findings are much too ridiculously false to serve as a closure.

Martin Manley was suffering his Tail  of the dragon in Leo. Leo rules LIFE, fame and power and while I should be more sensitive and considerate my integrity forces me to be brutally honest. This mean a Leo Dragon’s Tail carry’s also a HUGE ego and a serious need of recognition and by committing suicide “publicly” served his deep subconscious purpose to reach fame and immortality.

Martin was born with a stellium or  five planets in Leo including his negative Dragon’s Tail,  but what all this astro stuff mean to all the cosmic unconscious scientists reading my work? NOTHING! its all new Age Astro – garbage, only pseudo-science to all those “educated” professors who knows nothing of  the human psyche direct relationship with the Universal Mind.

Martin’s 3rd house of critical thinking  is plagued with Saturn (the depressive  mathematician) and deceptive Neptune which mean he was either taking legal / illegal drugs or under medications to fight his regular depressions.

“Today is August 15, 2013. Today is my 60th birthday. Today is the last day of my life,” the home page reads. “Today, I committed suicide. Today, is the first day this site is active, but it will be here for years to come.”

The last Full Moon in Aquarius trigged more than usual cosmic energy from his Dragon’s Head located in his 7th house (the public) ET VOILA! This shocking act is another addition (and proof in Princess Diana and Area 51 ) of the collection of shocking news and warnings still posted on You Tube. Are you still denying the obvious about Dr. Turi?

The sad reality is scientists like Lawrence Calhoun, Doctor – Rima E. Laibow, MD and all other practician professors of psychology teaching from thousands of “accredited” Universities all over the world HAVE NO CLUE of what produce suicidal tendencies because they own NO COSMIC CONSCIOUSNESS and because they are all the product of the controlling traditional scientific/religious matrixes.

My cosmic wisdom assures you the real answers to what it means to be human and why people from all ages commit suicide. But while all the victims of the educational matrix are dead they are the lucky ones because unlike Adam Lanza and many others lost souls they did not tarnish the names of the surviving families by killing and taking innocent people with them.

All I am asking my readers to do now is to take the time to listen to Roxy and I, last night two hours radio show and gather more information on the cosmic code and the controlling matrix at work. Become aware that 99.09% of human beings are ROBOTS of their stars and act them out unconsciously, sometimes in a weird way as seen in Martin’s case desperate attempt to reach fame and attention.

Don’t you think its time for you to bring me into those “accredited” colleges and Universities to teach Astropsychology to your children?

Remember there are people that are either envious or unable to get my cosmic message .i.e.  “I’m cash poor but I am absolutely rich in every way that I can think of just because I’m grateful” and some listeners comments show both obvious inferiority and insecurity complexes. Please concentrate on the dialogue, the wisdom I am trying to share with you and do not perceive my self assurance and strong passionate delivery as an ego trip.

I mentioned a few times to Roxy, “you can take the horse to the river this does not mean he will nor can he drink at the source of cosmic wisdom, its only when the student is ready that the real teacher will appear!” 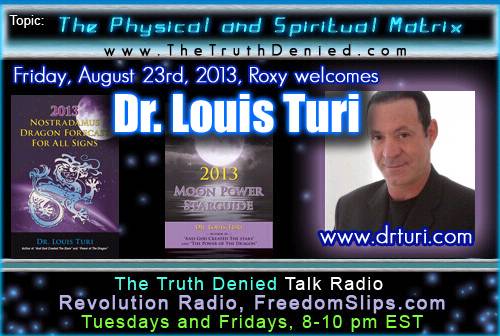 Talking about the cosmic code, the matrixes and the parts you play in them!

Lastly I have decided to stop offering my pearls of wisdom for FREE to the public and I hope many of you enjoyed my FREE books too!  I will slowly but surely  stop generating educational cosmic code newsletter as this one for my wisdom is real and priceless and must only be shared with those who rewarded my endless efforts by become VIP’s of the Cosmic Code website.

Meantime I want to offer you yet another proof of my good heart by offering you a 12 months subscription for FREE  WITH THE PURCHASE OF ONE OF MY BOOKS.

Make sure to email Terania at teraniapromodir@gmail.com to mention the deal and she will comp you in in a timely manner. This deal is only good for today ONLY! so do not miss the boat order NOW!

While I will never stop writing for my VIP’s and I gave my best shot in Roxy radio show and I already saw the ugly face of enviousness. Please show your support there too if my cosmic wisdom and I mean anything to you. As promised I will soon generate another You Tube video to stimulate the skeptics’ spiritual upgrade to become more refined, perceptive and decent human beings.

DONATE NOW! AND SHOW YOUR SUPPORT BY BECOMING A VIP TO THE COSMIC CODE.

JOIN MY CAUSE FREE YOUR SPIRIT FROM THE MATRIX!

I HAVE A DREAM, THAT IS… FOR HUMANITY TO WAKE UP!

The Declaration of Divine Cosmic Consciousness

We are living some incredible times where God’s celestial will can not be ignored by his children any longer and anything REAL, rough and true including humanity treating mother earth WILL be acknowledged