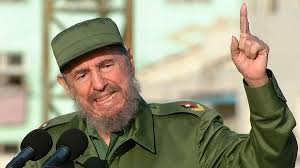 There are deep Astrological reasons to why political leaders reach power, turn into dictators and why the people they rule endure a terrible fate! All is fully explained further through the art and science of Astropsychology / Astroforensics in this article. At least, to those able and willing to raise above the uneducated, misinformed and gullible religious and/or atheist population.

For Fidel Castro to became the leader of Cuba or Hitler the Chancellor of Germany is NO accident and for the sake of humanity, my cosmic wisdom should be heeded by all before electing politicians… For their karmic  fate will be imposed upon those they rule. On 30 January 1933, Adolf Hitler was appointed Chancellor of Germany. The supposed one thousand year Reich had started. But it would be another nineteen months before Hitler achieved absolute power. 1932 Germany saw the rise of the Nazi party into a prominent political force.

Fidel Castro Had a Long Life

Fidel Alejandro Castro Ruz was a Cuban politician and revolutionary who governed the Republic of Cuba as Prime Minister from 1959 to 1976 and then as President from 1976 to 2008. Castro was born August 13, 1926 in Biraan, Cuba under the jurisdiction of Leo (the King/fame/power) and this sign rules LIFE!

But being a Leo is not enough to assure longevity. His natal Dragon is in the sign of Capricorn, the longest living sign of the Zodiac and this sign rules old age! In fact his Dragon alone  speak of his dramatic fate and his inborn cold ruthless iron character. Builder of the greatest towers
Holding all the social powers
Striving to climb to the highest peak
For honor has no place for the weak
I am CAPRICORN, child of Saturn.

This sign can build or destroy towers and it is no accident for both Hitler and Fidel Castro to share the same exact Capricorn Tail of Dragon!  This does not mean all souls born under this sign are all evil as there are other cosmic traits to keep in consideration…

The Nostradamus 16th century Divine Astrology I practice and teach our students focuses much on the natal and hidden dragons location by house and sign! Mostly because there is much more power there than in the entire complexity of the chart!

This is what makes the  difference between my Astrological work other astrologers and the modern astrology methodology used in those well designed, wasteful Facebook “For Entertainment Purpose Only” corporate website.

The Power of YOUR Dragon

Will you live a long life? Will you reach fame or fortune? Does your child have the essence of a killer or a healer? Will they become a bully, join ISIS or become a politician to aim for the Presidency? Will they become a sportsman, a singer, a cop, a famous actor, a doctor or decide to serve in the US Army?

While unevolved infected subhumans can only ridicule the formidable work of all the erudite men of the past, my spiritual work is too much to benefit their slow psychical evolution.  Mastering God celestial tools and reading the signs is not for everyone but only those blessed with an above average intelligence can appreciate the cosmic blessings offered to them.

There are many answers offered through divine astrology and when you find out where a cosmic God will promote or protect your child (or you) the journey start to lead to success. it’s all written in the stars but of course the stars don’t care, period! Read more on the karmic natal Dragon  and check our services to find out!

Who was Fidel Castro using the rational mind…

Please read the following before his exposed stars, fate and how and why his UCI lead him to do all he for or against his people; during his life in Cuba!

Fidel Castro died yesterday said Raul Castro, the current leader of Cuba, at the age of 90. The former dictator of Cuba ruled it with an iron fist for almost 50 years before his brother became the new leader in 2008.

Castro overthrew the government of dictator Fulgencio Batista in the Cuban Revolution, before installing a single-party communist state. The United States has had an embargo for the past fifty years, though President Obama has restored relations with the communist nation under the Cuba Thaw.

Fidel Castro has retired from politics since he handed over power to his brother, though he did write several columns and gave a speech to the Communist Party congress in April where he said Cuban communist concepts were still valid and the Cuban people “will be victorious.”

The deceased dictator has been viewed differently by various people. Many laud him for being a staunch anti-imperialist and making Cuba a bastion of communism just ninety miles away from the United States. Others criticize him for human rights violations, the exile of over a million Cubans from Cuba, along with blaming the United States for the poor state of the economy,  despite evidence to the contrary.

The man was known for his intense hatred of communists and his infamous Caravan of Death, where political enemies were thrown out of helicopters.

The way I explain the karmic human UCI is to the point and quite obvious. The problem does not reside in the translations but in the person’s own natal UCI and its ability to assimilate the proposed information.

Thus I have to use “the signs” and various sentences to make the information flow naturally. If you take the time to read our students comments on my work, its seems anyone can do it!

Keep in mind, this cosmic wisdom was taught by the Vatican council to all the Popes of the past and this rare wisdom was stolen  from the rest to benefit all the reptilius infected greedy abusive rulers of the past!

While I am now retired, I have learned more since my last Astrology course in Sedona many years ago but it’s good that we have all information on the astropsychology home course discs. Terania will also soon upload the discs to our private cosmic code website, so if interested; there is the option to buy it all at once or each disc separately. Now on to core of my cosmic wisdom and the full explanation of Fidel Castro’ stars and fate… Indeed translating the cosmic hieroglyphs of such man could appear extremely complex to the untrained eyes and mind of 99.9% of my readers, but it is not!

Join us to master the cosmic code secrets

IN MUTUAL RECEPTION: Moon in Libra Venus in Cancer

IN CRITICAL DEGREES: (Mansions of the Moon):
None

if you have a recurrent dream, a dream you can’t forget, or suffer nightmares in no way can I expose the answers to the general public. I took an example from one of our Facebook friends and posted my answer on my page as to judge my answer.

If you are interested, email teraniapromodir@gmail.com with any information you can recall of your dream. Do not add or embellish your dream. In fact, the more concise you are the better the interpretation. Smell colors, sound, picture, situations, animals, nature etc. must be part of a prophetic dream.  Make sure to include your DOB for me to check on the sign or planets affecting and ruling your subconscious.

I will write an email to you with my findings, guidance and predictions and I am sure you will find it revealing.