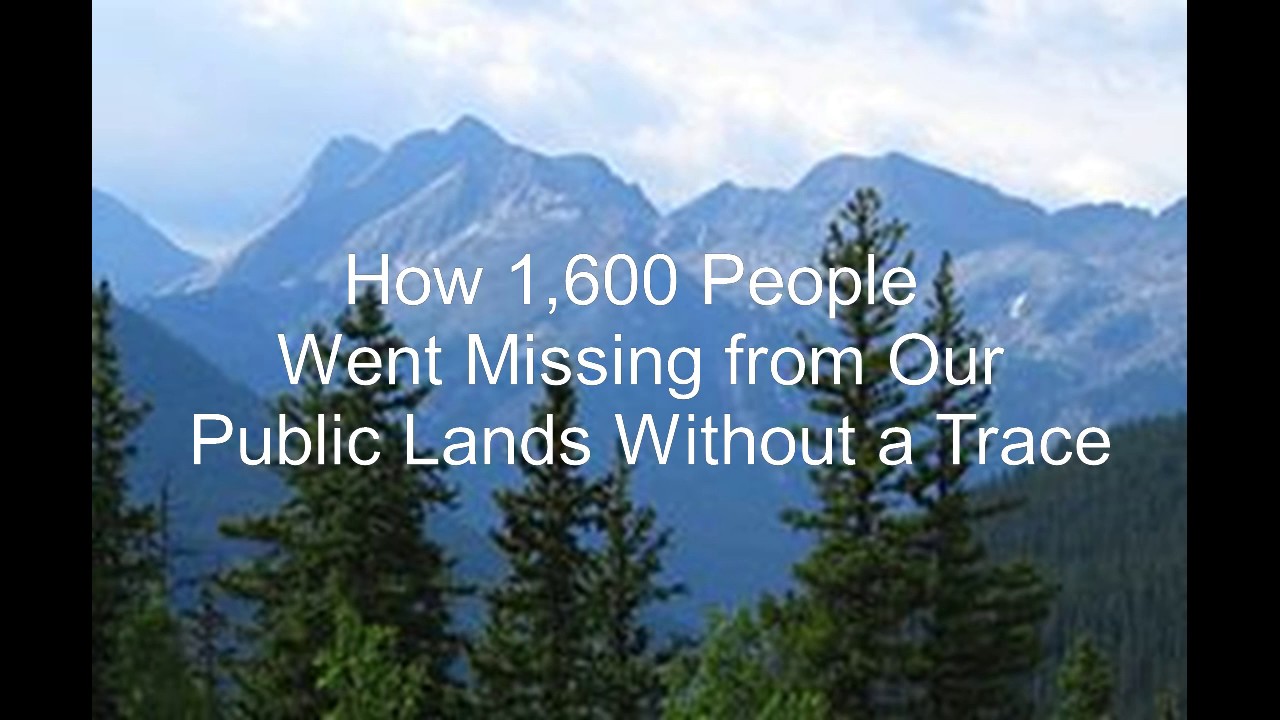 “When 18-year-old Joe Keller vanished from a dude ranch in Colorado’s Rio Grande National Forest, he joined the ranks of those missing on public land. No official tally exists, but their numbers are growing. And when an initial search turns up nothing, who’ll keep looking?”

The search engaged about 15 dogs and 200 people on foot, horseback, and ATV. An infrared-equipped airplane from the Colorado Division of Fire Prevention and Control also flew over the area. Collin’s brother Tanner set up a site that paid for a helicopter to search for five hours, and a volunteer flew his fixed-wing aircraft in the canyon multiple times.

A guy with a drone buzzed the steep embankments along Highway 17, the closest paved road, and the rock formation Faith, which has a cross on top. A $10,000 reward was posted for information. How far could a shirtless kid in running shoes get?

The absence of clues left a vacuum that quickly filled with anger, resentment, false hopes, and conspiracy theories. A tourist with a time-stamped receipt from a little gift shop in nearby Horca swore she saw two men on the road but later changed her story.

A psychic reached out on Facebook to report a vision that Joe was west of Sedona, Arizona. There was even a theory that he’d been kidnapped in order to have his organs harvested and sold on the black market. “We feel like he’s not in that area, he’s been taken from there,” Neal Keller would tell me months later.

The reptilius abduct people to destroy the human gene but the Draconis are very different, they are the “Gardeners'” of the world and  took me first when I was a child, then a few other times, at the beginning of the mission.

Read more about being a commissioned MJ12  below…

Joe Keller had just joined the foggy stratum of the hundreds or maybe thousands of people who’ve gone missing on our federal public lands. Thing is, nobody knows how many. The National Institute of Justice, the research arm of the Department of Justice, calls unidentified remains and missing persons “the nation’s silent mass disaster,” estimating that on any given day there are between 80,000 and 90,000 people actively listed with law enforcement as missing.

That leaves the only estimates to civilians and conspiracy theorists. Aficionados of the vanished believe that at least 1,600 people, and perhaps many times that number, ­remain missing on public lands under circumstances that defy easy explanation.

On August 4, 2015, after Joe had been missing for 13 days, Sheriff Galvez pulled the plug on the official search. What had ­begun as a barnyard musical was now a ghost story. The river—already dropping quickly—had been searched and ruled out. Dog teams had scratched up nothing. Abandoned ­cabins had been searched and searched again. “I mean, we checked the pit toilets at the ­campgrounds—we did everything,” Galvez said. “We even collected bear crap. We still have it in the evidence freezer.”

You may read the full article and make up your mind to what happened on this tragic day. But the answer and important clue to this dilemma is at the beginning of the story… “July 23, 2015 was the eve of Joseph Lloyd Keller’s 19th birthday.”

Of course the FBI “Federal Bureau of cosmic unconscious Idiots” could never accept my extraordinary, far fetched claims. If you are a conspiracy head following one of the many notorious, unconscious, reptilius infected “talking heads” more imaginary reasons will be offered to you!

If you are a “traditionally educated” born rational scientist or atheist, your logical natal UCI  is not advanced enough to accept the real reasons to what and why many people disappearfrom various public lands.

In fact today, Terania and I planned to visit “Fossil Creek” but to reach the main waterfall, travelers now need to hike eight miles. And at 67, I decided to pass. While I am sure with plenty of water and time we would be able to hike there, the main reason for me to scratch this trip is because the current SOS to the world deadly window, which happens to be one of my 2017 negative window dates.

The fact is; in Joseph Lloyd Keller’s case, “July 23, 2015” fell on his  2015 negative window dates and became his last birthday.  The reptilius are watching you each time you use your camera. It doesn’t seem many of you will get or accept this fact… Train track photo shoot turns tragic. Maybe you could be the next victim because you’d rather ignore and ridicule my warnings?

People do not get lost in the wilderness willingly. They are in constant contact with the cosmic conscious reptilius using their and our technology. Those entities are master of cyber warfare and will manipulate  cellphone and GPS and will confuse their oblivious victims. They will make them do stupid and deadly acts – Cyber Spies / reptilius Target Your Child

The reptilius abduct people to destroy the human gene but the Draconis are very different. They are the “Gardeners'” of the world and  took me first when I was a child, then a few other times, at the beginning of the mission.

Reptilius confine the human spirit into entertainment, religions and scientific  atheism convictions designed to nurture fears and doubts, steal your attention using technology then hijack your mind, blur your  psychical awareness and  stop  your spiritual interaction against them!

I am disgusted by the critics who ignore and criticize my wisdom on the divine and have no clue of your 2017 lucky/unlucky Personal Cosmic Biorhythms!

The reptilius are after famous people and children and they will do everything they can to hijack your body, mind and soul to kill! “he’s been taken from there,” Some of the victims will be found dead, some never will and simply disappeared for ever…

Of course you have a logical or better explanation than mine. Its called stupidity and that is exactly my point! And by denying my claim involving the reptilius’ agenda, you are no better than any of the victims who were killed by trains! And you are fulfilling the reptilius agenda!

No accident and no reptilius can harm you if you know what triggers their attention and most importantly, when they are active.  This is why the SOS to the world windows deadly windows and knowing your 2017 personal cosmic biorhythms is crucial. Otherwise, you are making the psychical invasion very easy indeed.

Religions will always come short to explain Satan, the devil, fallen angels etc. I am giving you the full rational explanation to what evil is about. I can help if your religious upbringing blurs your critical thinking  or if you believe my cosmic wisdom and UFO’s are unreal.

Some millennials  are already in position of power but they are dry, conditioned and victimized by many corporate “traditionally educated” matrixes who created them! Some were born either extremely religious, skeptic or atheist and all share the same shortcoming. They lack basic curiosity and think they know better than anyone around them! Opinion: Why millennials struggle? The Hard facts by Dr. Turi

They are indoctrinated by science and taught to ridicule what they can only assume is impossible. They only rely on their five limited human senses and ignore the “cosmic code jurisdictions” or “God’s cosmic divinity,” something they feel is beneath them.

67 years spent in my research is the equivalent of two or three of their combined young lives spent on earth, thus none of my books or rare cosmic wisdom could ever be an interest to them.

Paris suspect’s dad blames drugs, alcohol – “My son was not a terrorist. He never prayed and he drank,” said. “This is what happens under the influence of drink and cannabis.” Help us make the world aware of the reptilius, share my articles please, we are muted and removed form all medias for exposing the truth!

Depressions, confusion, religion, entertainment, technology, ego, fame, wealth, drugs, gluttony and sex are the formidable, impossible to resist lures used by the reptilius  envenoming much of the human race witch is lead by an ever growing, wealthy controlling corporate world.

Terania and I are much too advanced for this world while trying to stop the insanity is only an impractical dream. The reptilius own much of a lost indoctrinated society, unable and unwilling to seek answers too “unacceptable” or  painful to accept as possible.

Yet people including the secret services wonder how it is possible for an infected soul to bypass the White House technology! “White House Fence Jumper Was on Grounds 17 Minutes Before Detection“

A 2015 report by the House Oversight Committee called the Secret Service “an agency in crisis” and found that over a 10-year period, there had been 143 security breaches and attempted security breaches at secured facilities. And be sure there will be more! Indeed the “Federal Bureau of idiots” has much to learn from me but they will never budge.

Instead of harassing me twice because of my terrorist attacks predictions, maybe the  US secret services should pay more attention to my predictive work and astroforensics instead?

Terrorism, neuroscience and the FBI.

It is because Terania and I are cosmic conscious that we make life saving decisions. People travel, sign contracts, get married, go on holidays, take a cruise when they feel like and total disasters occur, or worse, they die in the process!  You don’t have to suffer a premature death and can avoid those  costly or deadly circumstances if you ask and you shall receive!

Then you have the idiots who could never get my help even if their life depend on it (and it does!)

Reply – Louis Turi. Is your and your loved ones’ lives worth $100 a year John?

You do not have to pay $100 to investigate my claims and read our various personal 2017 forecasts!  In fact, you may join for a full month for only $5.00 within the next 24 hours and if you like our work, join for as long as you want!

All I can do is to make you aware of our legitimacy because we certainly can not fight the Facebook and Google corporate FREE well designed astrology/tarot websites. And yes, you’ll get what you pay for, the entertaining printed words of a young soul! Or real guidance and predictions live on Skype with a 67 year old wise man!

You do not have to spend $700 or $350 on us, if you feel your life, your career, your health, you sanity and your children are not worth the amount!  And be sure, it will cost you much more in the long run for not giving yourself the chance to seek real cosmic wisdom and let me explain your destiny and avoid the reptilius effect..

You may use the above mentioned $5.00 deal to check our work first, or better start investigating the reality of my cosmic gift and my extraordinary experiences with UFO’s…I am Alien The Final Revelation

Understanding and explaining Nostradamus’ 16th century divine methodology isn’t difficult! All you have to do is be OBJECTIVE and not miss the FOREST for the tree. Read the quatrain and the keywords that will always take the color of the news currently posted on CNN! ET VOILA!

“If you can not assimilate my cosmic work or refuse to accept my predictive gift, you are not ready and do NOT deserve it!” Dr. Louis Turi 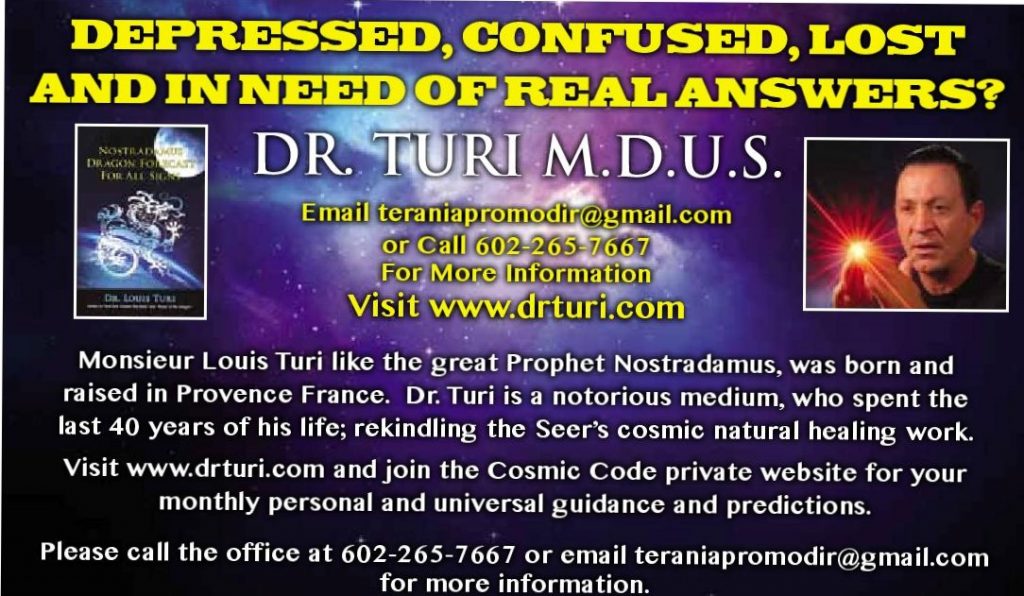