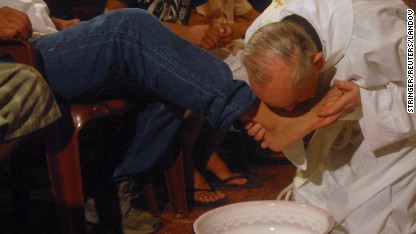 Note; In the medical aspect of Astropsychology, Pisces is the last sign of the Zodiac and control the feet and all confined places including churches  synagogues  temples, mental hospital, drugs and jails…  Pisces connection to all religions and the dead sea scrolls secrets are something you must read about!  This is total deception at best and I have a question for you reader, would you wash a criminals’ feet?  Someone that may have killed an innocent human being, a crook who stole money from you or a child molester?  Not me I know better –  Meantime this is a very scary picture enunciating the state of mind of a totally mentally religiously poisoned old man gone mad where logic and critical thinking does not apply! Or is it an act?

I would go as far as saying this act to sell religion or representing Pope Francis is not helping him, nor the Church Inc. and is even VULGAR!

What was your first impression when you saw the picture above? I felt the same way back in 1958 when I fist entered the dark  cold, smelly church in my village in the South of France and saw a man bleeding nailed to a cross. I knew subconsciously it was not a place for any child full of life to be and the teachings and promises for me to end up in hell for ever seemed already nonsensical.  But I was born smarter, intuitive, fast, curious and blessed by my creator with ADHD and a bit different than many other of his kids I guess! (Note if you want to know about ADD or ADHD being a gift and not a disorder simple Google it and add dr.turi behind any request ET VOILA!

This is not an act of faith, this is only a REAL and deceiving ACT or this Pope already shows some serious mental deterioration. He is either the perfect candidate to bring back the “good image” of the Church Inc. and the meaning behind the word humility or he is totally insane (or both?)  Hid dual nature (or his Gemini dragon’s tail) will vex and perplex many but the stars do not lie and I, once again saw it coming. In fact much of what this new elected Pope will project to the public and written about will be negative, this is just a start I am making you aware of!  If you are a VIP cosmic coder recall my printed words in “The Secrets Pope Francis Do Not Want You to Know“

Memo –  THIS POPE WILL NOT SAVE THE CHURCH INC. AND THE VATICAN  HIS TAIL OF THE DRAGON (NEGATIVE) IN THE 7TH HOUSE (THE  PUBLIC) WILL BRING TERRIBLE “PUBLICITY” TO THE PSYCHICALLY ABUSIVE CORPORATION – YOU MUST LISTEN TO THE ENTIRE SHOW ITS ALREADY HAPPENING. 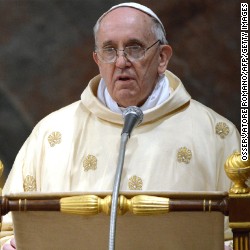 But knowing the world is made of  cosmic unconscious God fearing lost souls does my latest prediction involving Pope Francis’ latest public stunt “WILL BRING TERRIBLE PUBLICITY” make sense to my readers? But when I wrote about this Pope will bring bad publicity its because he is cursed facing the public by his dragon on his 7th house regimenting the public. I don’t think many of my readers really understood my warnings and visions yet! But, with time,  it will all become clearer if you keep reading my work as I follow Pope’s Francis future desperate Christian acts of madness…

This Pope is shacking the core and the foundations of the Vatican and some of the religious elites who put him in power may not necessarily agree with his exaggerated actions and the new portrayed Vatican “image.”  I can guarantee you that behind secret doors,  there are a lot of talks going on because; readers when is the last time you saw a picture of a Pope washing and kissing a criminal loser’s feet?

That was good 200 years ago during Jesus’ days but certainly do not apply for today’s Vatican’s supremely wealthy and powerful Illuminati elites secret image. Is this Pope going too far and too fast? Will the Illuminati in power have to “excuse” him or kill him too? After all the moronic mass of God fearing souls do not own a natural critical thinking and can not and will not think anything bad about Pope Francis’ latest stunt because washing and kissing the feet of criminals is something they would also do. OMG! Have mercy on your loss children…

Today’s criminals are not like those of Jesus’ time, stealing bread, clothing or water to survive in a harsh hot desertic barren world,  they are drugs dealers, crooks, child abusers and killers steering by the current  Scorpius Draconic! They are indeed the children of evil born to hurt, lie, cheat and kill or be killed by their own.  The image of compassion and forgiveness does not work with Satan kids, it never did and never will and this is why the sign of Libra (the scales of justice) must be used to bring an early karma to the perpetrators in the real world.

Born with the Tail of the Dragon “negative” on his 7th house (facing the moronic gullible public) Pope Francis’ fate will not fit the Vatican aims and many are worried of what this acting or mentally unstable Pope born with a Dual dragon will bring to the Church Inc. and its image in the long run. With the current Scorpius Draconis in charge of this world, NOTHING will be kept under the rag for long and all  the dirty secrets of the past will be brought to the light. Pope Francis is scaring the hell out of those who put him in power, much like President Obama cursed Aquarius Dragon’s Tail worries millions of the possibility of yet another prediction I made well before North Korea and Iran unhealthy involvement with nukes!

Rest assured readers, there will be many more Pope Francis’ public shocking demented displays and I will be there to point it out; if he is  either acting or if he is real so you can realize once and for all “The Power of the Dragon” and its upon anyone’s fate!  Lastly those who speak and represent God on earth are the least able to read the signs because humanity as since a long time ago lost its connection with God’s cosmic divinity…I am here to help you own your salvation and reclaim your stolen spirit as I am re-introducing humanity to what God truly is all about…

If you missed it, listen to our last radio program in the archives.