Sad enough CNN is once again offering you the undeniable proof of my predictive gift. This entry was created June 12, 2013 (19 days ago)  and posted in the cosmic code website and to the public on BIN , FB, Twitter etc.

MEMO from the Arian Draconis – I am generating the 2014/2016 “visions” or 25 Universal predictions that will change our world  for my VIP’s here is sample and another omen for you (‘Enter the Dragon’ actor dies.)

Prediction # 9 – A year of endless HUGE fires and record high temperatures  where many fire fighters will pay the ultimate price during my “SOS To The World Windows.”  Expect a full restructure of the International Association of Fire Fighters as the ministry of environment will impose many new rules affecting National Parks.  The Same “dragon” produced  the highest air temperature on Earth” — 134 degrees on July 10, 1913, in Death Valley’s Greenland Ranch. Become a VIP there are many more for you to acknowledge. 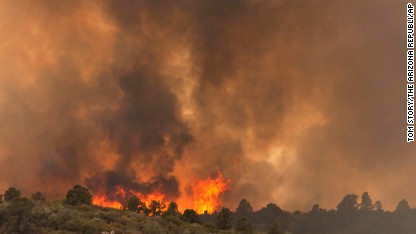 Anonymous
Amazing how this sociopath dog exploits the deaths of firefighters for profit.

Once more the current Scorpius Draconis has spoken, and while I prepared many of my steady readers to be ready for dramatic news it is obvious that there is indeed a serious message behind this tragedy involving my “visions” for the 2014/2016 Arian Draconis. Meantime adding to the dangerous waning moon (negative) none of those lost souls had access or read my warnings for the last few days of June 2013. My writing enunciate a lot of warnings involving a mixture of fire and water and this can only translate as a sad premonition involving fire fighters.

While hundreds of thousands of people from all walks of life, some in very high positions in your city, read my predictions, no one has reached for me or make any request for more predictions or explanations of my gift  to save lives… Yes religious poisoning or scepticism rules as the families of 19 brave men are crying trying desperately to find out what happened to their loved ones on that dramatic day… Where is the media? where are the people I know on television and radio and where are the elites of those cities who read my unarguable warnings on the Internet last June 12, 2013?

WHAT WILL IT TAKE FOR ME FOR THOSE PEOPLE TO TAKE ME SERIOUSLY AND WILL THEY EVER?

Are they still skeptical, all they have to do is to Goggle “hitlers-spirit-upon-germany/” and chech the date! This cosmic code newsletter was also directly mailed to my “Internet Black VIP List” made up of hundreds of politicians, cops, FBI agents, members of the Government, attorneys, teachers, famous TV, radio hosts, newspapers, magazines and journalists from all walks of life!

How many more civil servants and police officers will we have to lose before someone pay attention to Dr. Turi’s gift? Since 1991 I tried to reach the police administration  at no avail, will it be the same with fire-fighters?  Please read my “Police Requiem” and what the concerned cops are saying to me, all still unanswered by their superiors after so many years… Read the many comments they left me with and wonder why no one in power has of today has helped me to save ONE single life!

Neptune is called The Lord of Deception, illusion and STOP any form of logic in any given situation. It rules the religious illusive sign of Pisces, a WATER SIGN. It seem under the impatient Mars energy and the ungrounded Neptune energy a serious error was made and cost the lives of those brave men. But this is not a time to point out the finger to no one but to mourn the heavy loss of lives but as you know I am CNN before CNN and you will soon hear of those reasons reaching the media…

Updated: July 3rd, 2013 – Brendan McDonough, a lookout for his elite 20-man Arizona wildfire-fighting crew, saw Sunday’s blaze change directions and warned his team by radio from his hilltop perch. “He [McDonough] was doing what he was supposed to do,” Ward told CNN. “The crew was doing what they need to do. This is why they call this kind of thing an accident.”

DT: The sad reality is all the courageous firemen are part of the 99.09% of a cosmic unconscious world and had no idea of Mercury (wind/communication) in retrograde motion. This means”The Messenger of the Gods” or  the planet of communication can NOT be trusted or the information came too late. The same type of energy that took the Concordia and the Titanic down to its watery grave was responsible…

“God created the stars and the heavens for more than the sake of beauty, he gave them to us for interpretation so that you may lead a safer more productive life!”

Please sign my petition as I am trying so hard EVERYDAY to bring forth humanity’s cosmic consciousness so such tragedy can be avoided.

Here is a sample sceptre of my 2013 Moon Power:

Work, Career and Business: We are now into the Full Moon. Listen to intangible impulses from a different plane than the physical before making important decisions. Avoid insecurity and imagination blurring your vision or your faith during this trend. Neurotic tendencies and depression come from a heavy Neptune in anyone’s chart; use your will and see the bright side of your business life. You may find it hard to concentrate at work, but everything will be clear again in a couple of days. Keep emotions in control; use plenty of patience and diplomacy with co-workers or the boss at work. Try to concentrate on the future.

Partnerships: Mars is called the “Lord of war” for good reasons. Do not let him aggravate a situation, as this could hurt a friend or a loved one. (The purpose of Moon Power Starguide is to teach you firm control over the stars and to manage positively the outcome of any situation. If you know someone who needs help, offer this book as a birthday present.) Mars also rules cars and machinery, (FIRE TRUCKS?) and with deceiving Neptune around you should avoid drinking and driving (you should never do this, but right now, even a little could hurt you). Danger could enter the lives of those ignorant of the celestial rules just now; beware. You will be given energy from the red planet; make good use of it by channelling the power constructively. Still, Mars’ energy can help you start a new project, new business, even a new relationship. Keep a positive attitude.

Family and Friends: Help some family members see through the veil of self-deceit. Some of your friends may need spiritual support; work with them without getting emotionally involved in their problems. Again, keep away from alcohol after dark if you decide to meet them. A trip close to the water or Sea World will be rewarding. Keep a vigilant eye on the kids and your pet, as impatient drivers could hurt them. Be prudent; be patient but firm and confident. Spend some time with the children, teach them love and harmony as Mars may make them play rough. Be aware around water.

Love Affairs: Come right out with what you feel and don’t be vague in love matters. Secret love affairs will start under Neptune’s deceiving power and many will end up deceived; beware whom you tell! Avoid drinking heavily and enjoy a great walk by the sea or any watery area. If you were born in April, a Leo or a Sagittarius will be strongly attracted to you. At any rate do not expect much with love now; you’d better wait for better auspices.

Travel and Communication: Some of us may experience strange things in unfamiliar places or find themselves with weird people. Keep an eye on your personal belongings and learn to rely on your gut feelings. Nevertheless, you can expect heavenly intervention in a dangerous situation. For those at sea, take all precautions as the weather could turn nasty without much notice.  PHOENIX HEAT WAVE?) Plan a trip to Hawaii or any exotic islands now and try to go after the new Moon.

Environment: Disturbing news from the sea, oil and flooding is a possibility. News about medicine and chemical explosions and broken dams can also be expected.

Famous Personalities: Sad news regarding alcoholism, drugs and incarceration will come about the rich and famous. Some famous souls might have to learn the law and may find themselves in trouble. The release of a new movie will make some of them very happy. Certain famous people will suffer incarceration or hospitalization.

Events: Depressing and explosive news will come from the Middle East. Oil prices may rise due to another oil spill. Expect water, tornadoes, typhoons, hurricanes and earthquakes news soon.

Shopping: This is not a great time to invest in anything related to the spiritual arts. As a rule, musical instruments, painting and spiritual materials should be bought before the upcoming Full Moon. Invest in cleansing tools only.

William James, a philosopher and psychologist, once said, “The greatest revolution of our generation is the discovery that human beings, by changing the inner attitudes of their minds, can change the outer aspects of their lives.”   Create a positive inner attitude and you can change your life and career… Enjoy –

KEYWORDS
Beginning / Ending of Important Portion of Life / Forced Relocation / Destructive weather / A new Planned and / or Unplanned Life For Many.

I WILL POST THE RESULTS THEN HERE SO COMEBACK TO CHECK…