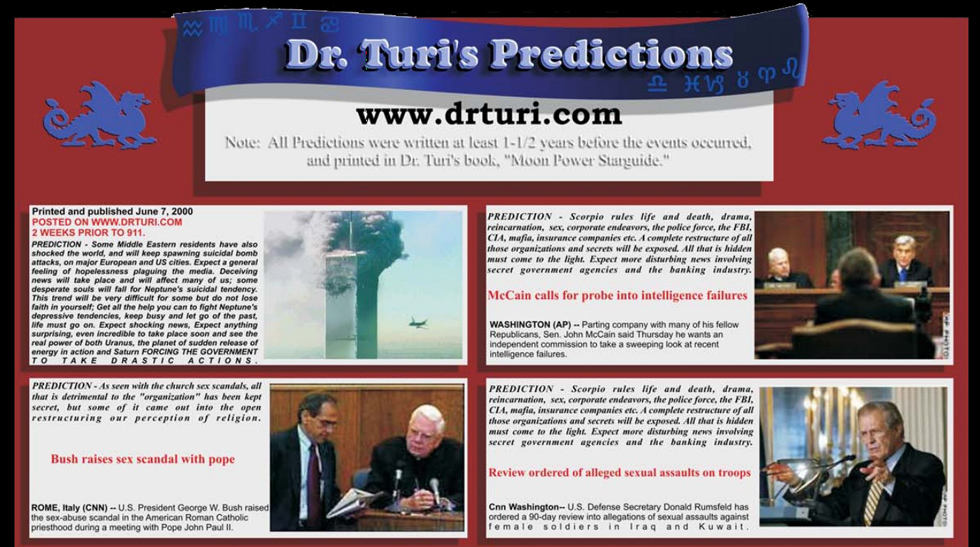 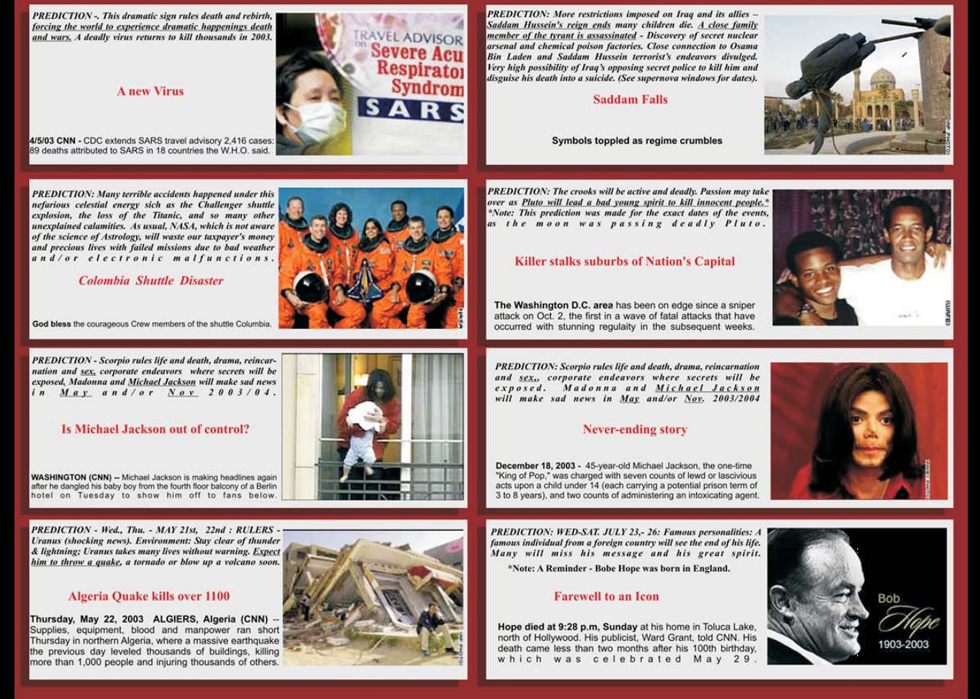 In July, 2000, astrologer Louis Turi posted some predictions on his website about disastrous events that would take place in September, 2001. Turi, who claims to make “predictions in the art of Nostradamus,” made this forecast, in part:

Bad news ahead for any and all denominations where religious figures will “pass over.” In 1998 the same type of celestial energy produced a murder in the Vatican followed by a suicide, which forced the Pope to address to the world in sadness. The Middle East “US surprising bombing attack” on Saddam Hussein forces in Iraq also took place under these circumstances. This energy can affect sophisticated electronic equipment and produce a bad aeronautic accident. Deception, illusion and secret affairs are on the agenda. The same Neptunian energy produced the Valdez disaster and the sinking of the Titanic in 1912. Expect a general feeling of hopelessness plaguing the media and the church authorities. Deceiving news will take place and affect many of us; some desperate souls will fall for Neptune’s suicidal tendency and some will end up in jail or a mental institution. This trend will be very difficult for some, but do not lose faith in yourself and trust the Universe; get all the help you can to fight Neptune’s depressive tendencies; amuse yourself, keep busy and let go of the past. Life must go on. Expect anything surprising, even incredible to take place soon and see the real power of both Uranus, the planet of sudden release of energy in action and Saturn FORCING THE GOVERNMENT TO TAKE DRASTIC ACTIONS.

It’s easy to pick out many of the key words and phrases that can relate to the WTC attack. Was the tragedy foretold in the stars and planets, or is this just another remarkable coincidence?

CHECK THE  PUBLIC VERSION OF MY PREDICTIONS FOR 2015

CHECK THE  PUBLIC VERSION OF MY PREDICTIONS FOR 2016

Click on the Banner Below For Dr. Turi Dated, Published Well Documented set of 2009/2010/2011 Record of Predictions

ALL Major Earthquakes Above 6.0 were FULLY and UNARGUABLY predicted in my book Moon Power and on my radio and television shows. I am the only Astrophile on the planet posting regularly my “SOS To The World” windows in all major websites preparing humankind for its impending fate. Of course people can accurately judge or swear by my predictive gift only if they paid attention to my work and get to know the real me. Until then a newcomer can only be skeptical! Take the time to investigate my mission to translate the Creator’s will upon mankind and understand the “Cosmic Code” because this is the only way God will speak to you.

Remember God’s words “I will speak to you…you won’t hear me, I will present myself to you, you won’t see me!” Only those who master the cosmic hieroglyphs will understand and heed God cosmic divinity!