“There are specific Universal Laws designed by God – Cosmic Consciousness is… the awareness of a divine cosmic  power and use it wisely to build emotional, financial and spiritual stability!”  Dr. Turi 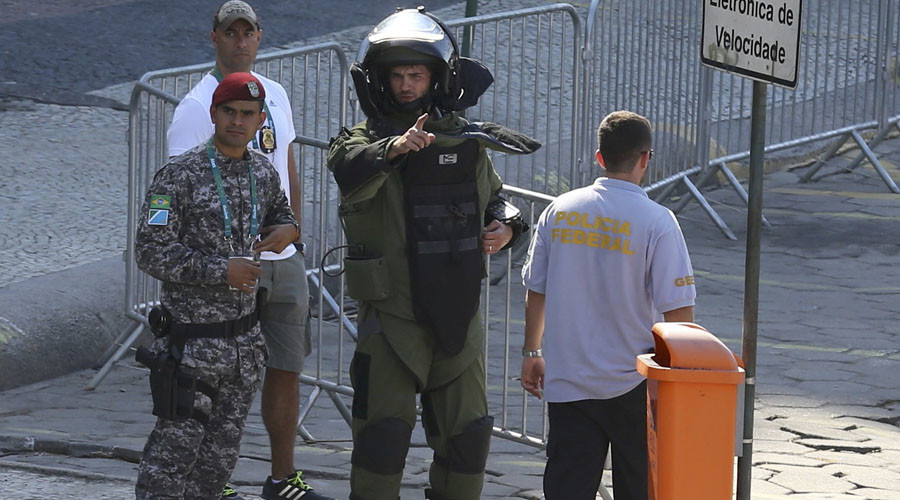 Controlled explosion carried out near Olympic cycling course in Rio

While I said no more FREE predictions, I can’t just watch the damage I foresee and do nothing about it! I must warn all of you and the secret services of my next SOS to the world deadly window! Those deadly cosmic winds will kill many and since the FBI are unable to benefit or use my cosmic work, the public  can. So, please pay attention and share widely please. There is no denying my previous July 2016 terrorists attacks predictions!

Humans and animals are infected and responding to the negative stars

WILL THE SECRET SERVICE EVER LEARN ANYTHING?
The psychology and neuroscience of terrorism by Dr. Turi

If the FBI visit me again, maybe this time they will pay more attention to my cosmic work and anticipate an upsurge in terrorist activity all over the world when I post my predictions!

Terrorism Predictions and the FBI

BE SAFE, be smart read Predictions for 2017 Nostradamus Personal and Universal Forecast

“An explorer, an energy company, and the local government are teaming up to install a network of around 80 Wi-Fi sensors inside the Masaya volcano. The idea is to create an early warning system before an eruption. Located just outside of Nicaragua’s capital city Managua, the active volcano is a test case for other early detection systems. Each sensor will gather environmental information from 1,200 feet inside the volcano. They’ll record gas levels, temperature, gravity and atmospheric pressure data.”

Volcano is turning into a (wireless) hot spot of SCIENTIFIC IDIOCY!

I wonder how long it will take for those traditionally educated idiots to realize that by the time the sophisticated electronic equipment used can start offering readings, it will be much too late for anyone to escape a volcano eruption, a tornado or a large earthquake!

Furthermore; I wonder how long will it take for the US Department of Education, NASA’s scientific community to realize that; there is much more than what technology or their five limited rational human senses, can offer tax payers; as far a natural disasters are concerned!

All I did for years was to offer the scientific community a steady, well documented proof of all my earthquakes  and volcanoes eruption yet, my cosmic ingeniousness is ignored and ridicule!… USGS the Ecuador and Japan earthquakes are NOT related!

The human realistic reasoning; reflects the damage inflicted by endless pounding of the religious and scientific indoctrinating “educational” matrixes, controlling all forms of information and your children’s early education.

Receiving an “accredited” religious or scientific education and paying a fortune for it, does not guarantee  you will own the truth to what it means to be human, to what create natural disasters or what God is all about! The very fact is, both religious and scientists groups are still trying to uncover the truth I own and share freely with all my readers.

Those supremely wealthy scientific and religious corporations (yes the Vatican is a corporation) monopolize the media and must spend your tax dollars (and donations) to avoid paying taxes by endlessly advertising their discovery of a new earth like planets or black holes mystery on CNN.

If you are a Christian and write, support and endorse archaic religious teachings, you can have your books published and advertised on national TV and radio for free! With such obvious masquerades going on, people have lost all critical thinking.

Those abusive organizations will go further to deceive you, suck all resources while keeping you misinformed The True $$$$$$$$$$pirit of NASA and still refuse to let you know about UFO’s flying our solar system?… NASA rebuts UFO speculation DECEPTION!

Getting an education is being molded, brainwashed, indoctrinated by the controlling matrixes running the show. You must become a part of a system they alone control. And this is why, since 1991 I never received enough support but also suffered a detrimental technological mutiny against my cosmic work!

The forces of evil have infected those greedy matrixes from top to bottom and trying to make you aware of the reptilius agenda brought me nothing else than to suffer ridicule…  Google, LinkedIn Satan’s Minions and Dr. Turi.

My cosmic ingeniousness is a serious threat to the establishment who need to keep you misinformed and gullible to survive and keep all the power they have over your life and your resources… Ridiculous science and correct prediction of big earthquakes and next volcano eruption!

Billions of dollars are spent to keep you amused, intertwined with sports, religions, sciences and detrimental entertainments! You must not be allowed to think for yourself, to think outside of the box and only constrained to follow the blind herd.

A modern prophet has no influence in 2016 and warning the world about a universal reptilius infestation or using astrology is something you were brainwashed to laugh at…  Zika Virus Universal Reptilius Infestation.

But the majority of my readers would rather give in to fear and one of the many entertainment matrixes than to consider I may be right! But when more horrific news remind them of the dangerous, poisoned world we live in, they would chose to remain in denial… Depression, Dementia, Suicide and the Reptilius Universal Infestation.

Humanity has not yet reached the point of no return but is close and this is why it is important for you, if you can relate to my work; to share it widely.  You are a vital part of this universe, and you know it or know, accept it or not, you play an important  part because you are a child of this marvelous universe.

Do not give in to fears, to insecurity, do not lose hope for the future of humanity, do not engage in negative conspiracies or endorse religious apocalyptic junk. If you do so, you are psychically infected and promote the reptilius negative, destructive agenda.  Do no follow nor sign up for any conspiracy or material that stimulate fears, insecurity especially if there is no practical solutions offered…  David Icke, the Reptilius Human Slave

Too many infected “talking heads” are commissioned to support the reptilius’ agenda, refuse to participate, exit the propaganda and instead watch and share this video!

The simple very fact to join a progressive, positive spiritual group becomes a major contribution to defeat those nefarious cosmic forces cursing humanity. You must realize there would be no possibility for life without opposite forces at work. No day without a night, no God without a devil, no male without a female, no positive without positive, this is a very simple but crucial fact!

There are forces and phenomenons in our solar system science many could never conceive or even accept, I am trying to make you aware of those magnificent forces. And those energies are designed to help us or kill us, it is as simple as that if you can accept the undiluted truth.

The more you dig, learn, understand, respect and use those cosmic forces the more power to you. But in the name of a rigid science and deceptive religions, in the name of fears or skepticism,  this absolutely mind boggling power will never be yours to use productively.

Remember there are no accidents, and all acts of God can be controlled and work in your favor if you learn how. But will curiosity survive your fears or your education?  You can be at the right place at the right time but, in the name of ignorance, it seems, more humans fall victims of those cosmic winds.

It seems difficult to reach you but I am trying to make you aware how important it is for you no to follow  and challenge the  blind “herd,” victimized by all those abusive matrixes. The choice is yours to realize, “knowledge is power, ignorance is evil!”