“If we offer only false products of Modern Astrology, no matter how  inspiring they maybe – without communicating its critical methods, how can the average person possibly distinguish divine Astrology from pseudoscience? ” Dr. Turi

Once again, it is important for my readers to realize my work is NOT politically oriented or in any way, shape or form defamatory to the President of the US!  It simply explains the stars, the fate of President Trump and the fact that, when you elect any president, all voters  (and the country) will  endure and experience  the best and the worse of the stars (or the UCI) of the president elected!  Donald Trump President?

While Trump is now our President and a very powerful man, he is a man under the jurisdiction of God’s cosmic will and his UCI can not be read or explained differently than any of our clients, friends and foes…

This universal cosmic unconsciousness is very dangerous because not only the unconscious rogue mass but also celebrities will join in this dance of cosmic ignorance madness. It is only by bringing back the past that; the more curious evolved readers will be able to upgrade their own consciousness by checking up the current news and the predictions published 11/6/2016.

Another Hollywood star ‘joked’ about killing Trump, but no one’s laughing

Memo – November 6, 2016 “Trump is far from being safe June and December 2017 will speak a cosmic wisdom the secret service so desperately need but can’t realize just yet!   Dangerous passionate infected reptilius fools are everywhere… “

My responsibility is not to feed the reptilius with more fears, chaos, discord and wish death to anyone, something the reptilius desperately need to survive in “Dark Matter!” But instead to illuminate the readers  on God’s cosmic Divinity and make them realize that; without cosmic consciousness they are all PEONS of the stars and easy targets of the reptilius!

Rich or poor, famous or not, male or female, people from all walks of life are manipulated by those nefarious entities! They hijack the body, mind and soul of millions of their possessed victims and force them to act foolishly or dangerously against the president and/or other human beings!

Our infantile science, the secret services religious, agnostics and atheists alike are ALL oblivious of my cosmic teachings, something they can only ridicule and ignore!  This low vibrational rational world is very young and a very dangerous place to live on when so many infected religious, scientific matrixes monopolize all information and keep indoctrinating society with lies.

Knowing the future is and has always been my utmost faithful witness, all I can do again is; to warn you with yet another quatrain and refresh your memory then… And hopefully warn the  members of the secret services because they are indeed failing miserably listening to the  cosmic voice of reason, when it comes to protecting our President!

“A cosmic unconscious society is not only an easy target for Dictators but a dangerous rogue force seeking changes for the sake of changes!” Dr. Turi

Back to the original article: Here is my usual Nostradamus’ 16th century divination methodology involving a date, (10/17/2016) a quatrain and a few obvious keywords… You are now the sole judge to a predictive gift no one can deny… And when I predicted a shocking election conducted/manipulated by the Russian/reptilius technologically, I was right again! 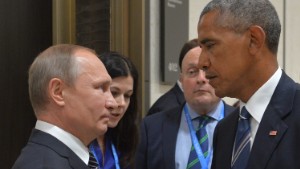 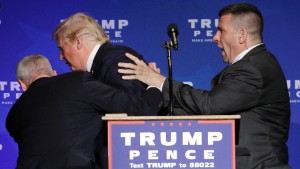 Trump rushed off stage at campaign rally; protester says he was roughed up

The “shocking” piece of new involving Trump and the FBI is NOT an accident but more of another omen of what the cosmic code (or God cosmic will) impose during the very original, unusual 2016 elections process.

Memo; “Just before the elections Hillary Clinton is suffering her 2016 negative personal cosmic biorhythms… The good news for her is that,  a few days  before November 8 (elections day) Trump will also experience one of his 2016 negative cosmic biorthyms!

Those cosmic winds will affect and change the political tide in Clinton’s favor but this will not stop the reptilius  in need of fear, chaos and disorder to survive and the oblivious mass of unconscious and reptilius infected people supporting both Trump and Clinton will respond to the destructive will of those nefarious entities to curse humanity after the Russian “rigged” elections using, abusing Technology at their advantage.

Trump is far from being safe June and December 2017 will speak a cosmic wisdom the secret service so desperately need but can’t realize just yet!   Dangerous passionate infected reptilius fools are everywhere…

Update: 121/8/2016: Obama under mounting pressure to disclose Russia’s role in US election – “Barack Obama is facing increasing pressure from congressional Democrats demanding further disclosures regarding Russia’s role in the 2016 US elections. A group of senior House Democrats has written to the president seeking a classified briefing for colleagues on “Russian entities’ hacking of American political organizations; hacking and strategic release of emails from campaign officials; the WikiLeaks disclosures; fake news stories produced and distributed with the intent to mislead American voters; and any other Russian or Russian-related interference or involvement in our recent election.” Additionally, the White House has not responded to a week-old letter signed by every Democratic and Democratic-aligned member of the Senate intelligence committee seeking declassification of “additional information concerning the Russian government and the US election”.

Trump supporter brutally attack gay man in California
Mob of thugs beat up an older man because he voted for Trump.

After this election all hell will break lose from the opposition and both Clinton and Trump will be both in serious danger of assassination… Because as I am writing this article, plans are made by infected militia groups to do so!  But I’m not sure how far I should  go in divulging the divine.”

Update: 11/11/2016 – Black Thug Threatens to Kill Donald Trump – And Ready to Die and Go to Hell – God Help America! – “You, your wife and your daughter are dead b**ch,” the masked man said while pointing guns at the camera. 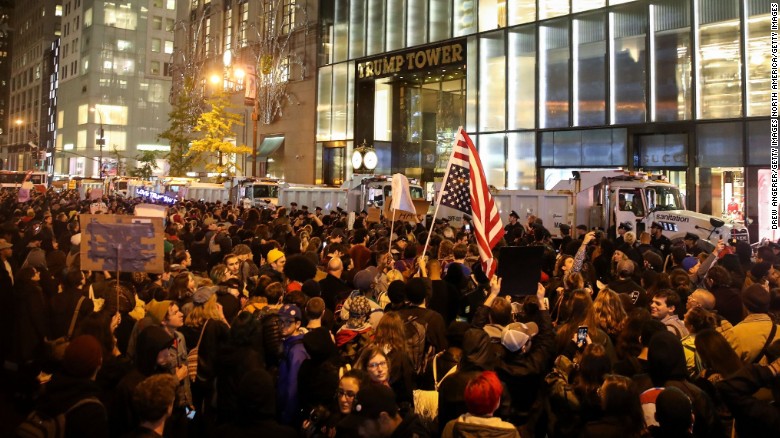 Thousands join anti-Trump protests across US

Memo:  Trump’s reptilius infected legacy is not over! The reptilius are using and need him…

Anything RED or the word info “WAR” is negative and reptilius infected!

Be in charge of YOUR LIFE and America’s fate!

Note also the “Predictions for 2017 Nostradamus Personal and Universal Forecast” involving the  Trump’s incident, clearly offers warnings that can not be denied! Meantime I perceive this as another omen to something highly unusual to take place. I may call it a  form of a weird “revolution.” Thanks to Pluto (the rogue mass/Trump) in Capricorn (GOP/Government traditional structures.)

It can be scary to realize those who want to lead the world are totally unconscious, completely oblivious to and misusing God’s cosmic will imposing the “shocking events” I foresee. Regardless who will become our next President, with billions of conflicting unconscious human UCI’s involved in the voting process, this humongous cosmic ignorance can only fuel more chaos, more problems,  more distrust abroad and more conflict with the police!

It seems impossible to refine an uneducated, gullible wild bull (Trump manipulating the masses) who’s unable and unwilling to compromise and ready to do anything in his power to reach the White House.

And nor can you trust a politician (Clinton) who’s lies, drive and power matches the bull madness.  Here you have the fast clever Matador (Clinton) trying to control and avoid the deadly horns of a raging bull (Trump!) But in the political arena, most of the time the Bull dies and the Matador is veneered for his courage.

The question remain and in some cases the bull survive and hurt or even kill the Matador. But in the human political arena the bull is spared and is returned to the wildness (Trump’ supporters!) And the fight never end until one of them dies.

Knowing Clinton’s UCI involve her Dragon’s Tail (negative) is in Scorpio (FBI/criminals) right in her 8th house of  death and corporate endeavors, as our President she can’t trust  the US secret services.

In fact; Clinton’s UCI is very similar to JFK and we all know how he died!  While I hope my visions and handling of a rare cosmic wisdom will never take place, I am still here to offer my readers (and VIP’s) the undiluted truth!

Trump’s natal UCI  involve his Dragon’s Tail (negative) is in Capricorn (politics) right in his 8th house of  death and corporate endeavors, as our President he will always be in danger while speaking publicly or traveling on foreign grounds.

Knowing this is one of the last public articles I added the predictions section from “November 2016 daily guidance and predictions…” – Please comeback to this article as I add the news you will read on CNN right here and confirm my visions.

Work, Career and Business: With the good moon upon us, expect to make some progress for a while. Listen to other people’s stories; the stars affect everybody and they may come up with interesting deals or surprising news. Be ready to invest in some appliances or equipment. Saturn will help you to make some great adjustments after careful planning.

Partnerships: With Uranus in charge, anything unusual can happen. With a waxing Moon (positive) upon us, those changes should be progressive. Changes should be accepted with faith in yourself and your new future. Be patient with everyone, as Uranus and Saturn may make people eccentric and depressed.

Family and Friends: An opportunity to meet with some family members or friends you have not seen for a while will be given to you by this lunation. The past will come alive again and a great time is offered to all. The children will have a blast on Xmas day enjoying their new toys. Make good use of these days and enjoy the food, security and love of your peers.

Love Affairs: Be ready for the incredible to happen; if you are in a karmic relationship changes may be forced upon you and are needed. Friends may fall in love with other friends or mistake love for friendship. An old love or a past friend will reappear in your life soon and with him the option to start fresh again. If you were born under one of the earth signs, expect good surprises and great changes. If you are a Sagittarius, a Leo friend needs to talk to you and someone born in April or February needs to go places with you. A friend born in June might fall for you.

Travel and Communication: A trip far away may lead you to people from the past. For UFO investigators, now is the time to look for UFO’s in secluded places. Don’t forget your video camera; you may be sorry if you are not ready, as Uranus is now willing to display secrets of extraterrestrial intelligence. Expect things in the sky or NASA to make the news.

Environment: Tornadoes earthquakes and air accidents are high on the list.

Famous Personalities: Very surprising news will come from the rich and famous doing great things for the children of the world during Xmas season.

Events: Uranus loves accidents and explosions; under his power expect surprising and original pieces of news to take place. FBI clears Clinton — again Do not take chances with the children and be safe.

Shopping: Purchase new electronic equipment or plan a long voyage by air to a foreign land. As always, Uranus rules the future, and his psychic powers can be used through your trusted local psychic or astrologer.

I am offering my more spiritually inclined readers The biggest super moon and the gravest omen since 1948 and hopefully, those able and willing to perceive the power of the moon over humankind affairs and all life on earth, will share my work for the sake of humanity’s future.