For those who know me and the Cosmic Code jurisdictions, no explanation is necessary; for those who do not, none will ever suffice… 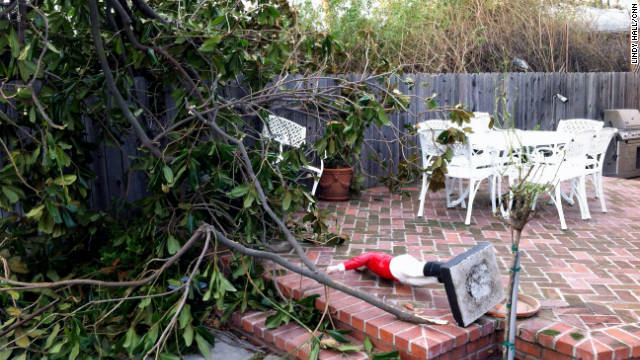 Winds up to 140 mph hit California

Hurricane-force winds leave widespread damage across half a dozen states, including California and Utah.

It’s all part of a system the federal weather agency called “the strongest easterly wind event in the past several years.”

Dear Readers;  I wonder when our infantile science will start to acknowledge the values involving the Cosmic Code responsible for all human and natural affairs?  Indeed reading the AIR signs last year and see my vision unfolding as “predicted” on CNN makes me better than all the NWS -NASA  and  the  federal weather agency educated heads combined together and I do all this for free. It seems logical to invest your taxes in this rare “pseudo-science” because “It’s all part of a system the federal weather agency called”  IGNORANCE!

The facts are plain to see TODAY on CNN when I saw it all happening back in June 2010 when I wrote my “predictions.” Don’t you think its time for our governmental officials to stop fighting each others using religions to get in power and instead look above in the stars to see who they endorse?  Again readers, all you have is those deceptive archaic religious teachings, your infantile science and unconscious “conspiracy “Talking Heads”  spreading their ignorance at the speed of light to a lost, moronic mass of followers.

And if science could / would acknowledge, use or predict weather patterns and human behavior within the UCI or “Unique Celestial Identity” software system I developed, might they (our politicians/science and humanity at large) not also find a way to control their mental shortcoming?

Enjoy the facts, join my cause and help me change this world…

Memo from my prediction page…

We are fast moving to an “AIR” dragon that will have the “weather man” wondering what the heck is going on and all the fire fighters on their toes. I see quite a lot of tornadoes; wind storms, sand storms, fire storms stopping traffic (check 2011 Moon power Supernova windows for most impact) and such a “wind” activity can only make the upcoming hurricane “season” a very busy one. Again do not expect the NWS or science at large to remotely understand the inner workings of the Cosmic Code or God’ sign plaguing the world in the year 2011 until August 2012.

Psychic power is very real and to a certain extend all human beings possess it. Certain experiences can stimulate the subconscious to interact with the Supraconscious in time and space and feed on the archetypal realm of consciousness. Nancy is a very gifted psychic herself and I will explain using Astropsychology why top spiritualists healers such as Nostradamus, Edgar Cayce, Madame Vladasky  were born extraordinary gifted  pyschics. This show promises to be very educational for all the psychics and the public using psychics.

BE THERE HAVE YOUR QUESTIONS READY DO NOT MISS IT!

YOU FOUND THE REAL THING!