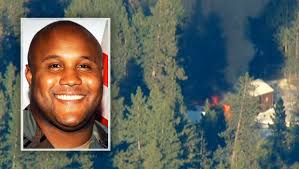 The Execution of Christopher Dorner

“But for those of us listening to the San Bernardino Sheriff’s Department radio frequency, there was little question what had occurred. Nearly a half hour prior, officers had referred to “going ahead with the plan with the burner,” with another adding that the plan was to “back the Bear down and deploy the burner through the turret.” (Live audio during the preceding shootout seems to confirm this intention). Soon, the message was straightforward and expected: “Seven burners have deployed and we have a fire.” No surprised tones, no suggestion that the fire be extinguished.” 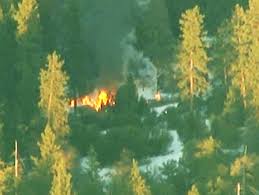 “Police: Cabin rubble too hot to examine, no body yet recovered at shootout site”

“I wonder what type of incendiary device the cops used to fry the bear in his den, but who’s to blame them for sending a psychotic killer to hell where he belong? Is this why helicopters and news-media were warned to stay away from the zone? Yes I can see the drama unfolding through a much more spiritual eye only a few cosmic gifted souls own… Human deals with life rationally, science and traditional education lead this mad dance where the spirit has no values or worse, ridicule.”

THERE IS SO MUCH MORE IN STORE FOR THE POLICE AND THEY DO NOT KNOW YET!

THIS IS JUST THE BEGINNING!

DID YOU READ Who Was Christopher Dorner YET?

I’m not sure why you mentioned being wrong other than it was reported that his body was burned up in the cabin on the twelfth  but that was recanted by LAPD saying that no body was found due to the cabin still being hot, as they hadn’t yet entered the building.  Let’s not forget, that there’s always at least one way out of any hopeless situation, so had he survived then the drama would’ve continued into those future dates.

I looked at the map of Big Bear in the San Bernadino area and it has a lake named Big Bear Lake and previously, they lost his tracks on the edge of a lake, so you were right about him being near water. But I’m curious, why were you were referring to him as a bear? Is it because of staying current with the news reports or did you come up with that on your own?